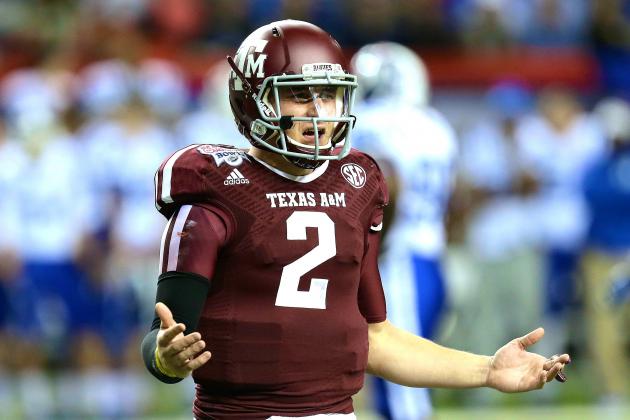 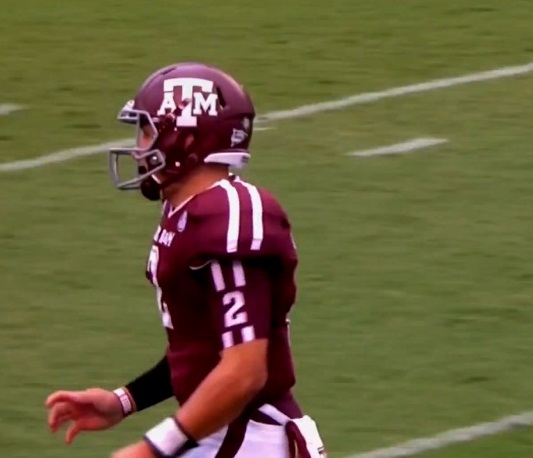 The Browns missed a heck of a show.

Even former President George H.W. Bush and his wife, Barbara, knew a chance to see Manziel’s pro day in person shouldn’t be missed. They watched the workout while seated in a golf cart.

Instead of performing in the standard pro-day attire of shorts and a T-shirt, Manziel donned a helmet and shoulder pads. He called plays while huddling with receivers and took snaps from under center. As he dropped back to throw, his private quarterback coach, Massillon native George Whitfield Jr., repeatedly chased him with a broom to simulate defensive pressure.

Manziel completed 61-of-64 passes. An off-target throw, a ball caught out of bounds and another dropped by a receiver accounted for the incompletions.

“He made me say, ‘Wow,’ ” analyst Kurt Warner, a former quarterback and Super Bowl MVP, said during NFL Network’s telecast.

Manziel also managed to win over ESPN analyst Ron Jaworski, who was one of his harshest critics. Last month, Jaworski made headlines when he told a Philadelphia radio station that he wouldn’t draft Manziel in the first three rounds.

“There’s no question this was one of those ‘wow’ type of workouts” Jaworski said on the air Thursday. “… I saw a tremendous improvement in the mechanics of Johnny Manziel. He moves up on my board.”

The Browns have the fourth overall pick in May’s draft, and they’re certainly in the market for a quarterback. They were also the only team in the top five without a head coach or a GM present.

Browns coach Mike Pettine and GM Ray Farmer revealed earlier in the week at the NFL owners meetings that they would not attend Manziel’s pro day. But Pettine said the team would soon conduct private workouts with the three top-rated quarterbacks in this year’s draft — Manziel, Central Florida’s Blake Bortles and Louisville’s Teddy Bridgewater — in addition to several other players at the position. The Browns also plan to host the top quarterbacks for pre-draft visits.

“I’m not disappointed,” Manziel told reporters when asked about the Browns skipping his pro day. “If they wanted to be here, they had the opportunity to. I don’t think anything of it. … I don’t hold it against them. It is what it is.”

Farmer attended Texas A&M’s game against Alabama last season and has thoroughly studied Manziel as well as other quarterbacks. He alluded to the homework he has done while defending his decision not to attend Manziel’s pro day.

“A pro day of orchestrated throws, I don’t know what that tells you,” Farmer said at the owners meetings. “It’s a piece of it that people blow up into being this great thing that you get a chance to watch this guy throw the ball live. I went to a lot of games and practices this fall. I’ve seen these guys throw the ball. I’ve seen them perform in a lot of ways. So it’s not about watching them throw the ball, watching it come off his hand. A lot of those pieces have been addressed.”

“You get a lot more out of a private workout when it’s a little less scripted or it’s scripted the way you want it scripted, where you can kind of throw some curveballs at a player and see how they react to it,” Pettine said at the owners meetings. “It’s like the difference between a guy hitting home runs at batting practice versus live pitching. I think it’s important you get that concentrated view of a player instead of something that’s borderline artificial. We certainly get the video of the pro days and see them, so you kind of get the best of both worlds.”

The Browns had at least one scout at the pro days of Bortles and Bridgewater, and Farmer reportedly attended them as well. Neither Pettine nor his top offensive assistants attended those pro days.

During the owners meetings, Pettine, Farmer and owner Jimmy Haslam stressed they’re not approaching the fourth overall pick with a quarterback-or-bust mentality. The Browns have a late first-round pick (No. 26 overall) and an early second-round selection (No. 35 overall), and Pettine said he believes an immediate starter could be found in the second tier of this year’s quarterback class.

Of course, the Browns could still draft a quarterback at No. 4. And for what it’s worth, Browns All Pro wide receiver Josh Gordon revealed Thursday on SportsCenter that he believes the franchise will go that route, although he didn’t initially mention Manziel.

“There’s no telling,” Gordon said. “I talked with Ray [Farmer]. I talked with Jimmy [Haslam]. The choice is really up in the air right now. I’m pretty sure it’s a quarterback, and I just really can’t say which one. I’m not real sure.

“There’s plenty of guys on the list right now. Blake Bortles is definitely one of those guys that just may do it for us. Teddy Bridgewater is a great talent. But there’s no telling.”

The entire draft order was set this week.

As expected, former New York Jets quarterback Mark Sanchez agreed to terms Thursday with the Philadelphia Eagles, according to multiple reports. Earlier in the week, Pettine said the Browns would have discussions about Sanchez. However, the team’s interest seemed lukewarm. … The Browns will host Texas guard Trey Hopkins on one of their 30 pre-draft visits, Tony Pauline of DraftInsider.net reported.