Adam Lambert made a name for himself way back in 2009 when he came runner up on the eighth series of American Idol thanks to his ruddy brilliant voice and unique, glam-rock style.

Six years later and the star is still going strong as he gears up for the release of his third studio album, ‘The Original High’, but the 33-year-old has surprised fans with an image overhaul – ditching the guyliner and quirky style in favour of a rough-’n’-ready bearded look.

Needless to say, he is looking hotter than ever before.

Now, in a brand new interview with Notion magazine, the singer has opened up about why he decided that it was time to change his style, and it’s all pretty reasonable actually.

Adam explained: “Someone said to me ‘Oh, you’re not wearing all that crazy sh*t, are you trying to tone it down?’ 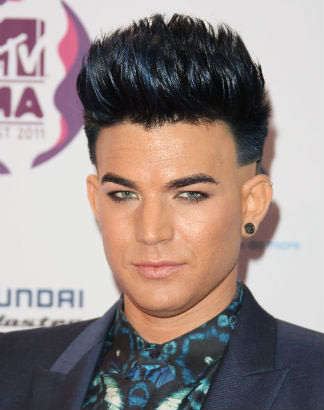 Ugh, we reckon anybody that has ever piled on the make-up and accessories can feel you there, babes.

Adam went on to add that it wasn’t just his physical appearance that had seen a change of late, also revealing that his upcoming album was also totally different to anything that he has done before, sharing: “The album is dance-y but bittersweet, and the lyrics are a little darker [than that have been previously].

“I’ve done the more bubblegum stuff, I’ve done the camp stuff, and now I want to encourage people to face their sh*t.

“I want to show them the part of me that’s not all polished or [still part of] the ‘pageant on TV’ thing – I want it to be real, you know?”

Errrm, we *think* that we know…

Talking about his vocals, the man who stood in for actual legend Freddie Mercury on the latest Queen tour modestly revealed: “I think one of the things I’ve been learning is the ‘less is more’ approach to a lot of things.

“Less is a little easier.

“The music industry is crazy, competitive and focused. [With this album] I finally became more grounded about all of the fame stuff; it’s not freaking me out anymore.”

Which we have to be honest is bloomin’ brilliant to know, because having been lucky enough to have a sneaky listen to Adam’s hotly-anticipated third album and we know for a fact that he’s about to become even bigger than ever before.

And to be honest, we couldn’t be more ready for it.

Adam will premiere ‘Ghost Town’ on April 21, followed by the album ‘The Original High’ in the spring.

[ Adam Lambert’s Eyes Are Bewitching In This photoshoot ]

[ Adam Lambert Is Announced As The New Queen Frontman - WOWZER ]