After competing on American Idol back in 2009, Adam Lambert became an overnight star – but even he couldn’t anticipate that just five years later he would be filling music legend Freddie Mercury’s shoes as he hit the road with Brian May and Roger Taylor of actual Queen.

And not only that, he was critically acclaimed for his efforts. 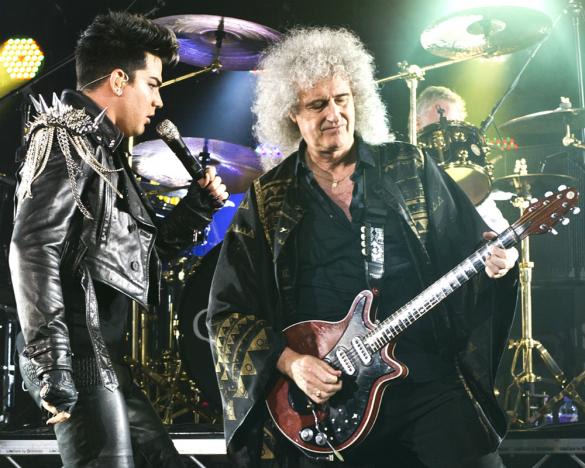 Fresh from jetting across the globe with his two new bezzie mates, Adam was back on the scene in time to release his third solo album, ‘The Original High’, and when we joined him for an exclusive playback we just had to get all the goss on what it was like to be a stand-in member for one of the most iconic bands in history.

The 33 year old admits: “I was in a little bit of a rut before all that started; I was ready for the next thing and being on stage with Queen, in front of an audience that loves the band that much, it was really rewarding.

“It gave me this kick of confidence and it was a good challenge. I wasn’t sure how it was going to be recieved and every night I felt like I had to prove myself.

“There were skeptics out there so it was a challenge every night, which was actually good for my spirit.”

We can only imagine, and thankfully, Adam’s performance always ended up being a roaring success.

Still, it isn’t just a new bout of confidence that the star was rewarded with following the tour, with Adam also going on to reveal just how close he became with his new bandmates, despite being over thirty years younger than them.

“Brian’s a breeze,” Adam explains, “He’s so sweet and thoughtful. Him and Roger are great and they feel like family now, so it’s very comfortable.

“We had lots in common, which was so fun. We all realise there’s a bit of a generation gap and I just asked them a lot of Queen folklore stories, we got along really well.

“Roger and I have a lot in common when it comes to lifestyle; we both like nice things, nice clothes, and parties and we also bonded over tattoos. Roger’s a bit more of a party animal but brian will let his hair down – literally!”

And touring with one of the biggest band’s in the world didn’t come without its perks, with Adam adding: “We’d do a gig and then got on a plane, I’m not used to flying private jet for my work so I was very spoilt by this.

“We’d get on and eat dinner and talk about the show and have bonding moments. There were a lot of discussions about issues and half of what they were talking about was based on UK politics, which I didn’t know much about, so I just listened and learned.

“They’re both really smart so it was nice to be around good, intelligent, well-traveled men.”

But it wasn’t all politics and dinners, as Adam recounted to us one night in particular that got a little bit wild, sharing: “We were in Amsterdam for my birthday… We found a club there and we had a room of our own, it was very… Dutch.”

In all the chatter, Adam also told us that although he didn’t hit any gay bars with Brian and Roger, he knows for a fact that they would have gone along if he wanted them to, saying: “If the only option was a gay club then they would be game.

“Obviously they knew Freddie Mercury and his lifestyle wasn’t an issue for them at all, it was his choice.

“They told me a lot of stories about him and he sounded like a lot of fun… I got such a great idea of his personality.”

Agh, it certainly sounds like an experience, doesn’t it?

Brian May features on a new track on Adam Lambert’s album, The Original High, which is available to buy NOW.

[ Adam Lambert: 'I Got Tired Of Wearing All That Crazy Sh*t' ]