It was most definitely a family affair.

Who would have thought that Angelina Jolie and Brad Pitt were the type of celebs who would sell their Wedding photos to a magazine?

Well, luckily for us they totally are!

Although, to be honest, they most likely donated the money that they made from the shoot to a charity or something equally perfect, because that’s just how they roll.

Yes, all the details have landed from the Jolie-Pitt wedding, and one thing that is for sure is that the couple’s six children played the biggest roles.

Angelina looked stunning in an ivory Atelier Versace gown, with an added touch of sentimentality in the form of dozens of her children’s drawings sewn into the back of the dress and the veil.

Hmm, we think the E! Insider who gushed about how Ang opted for “a very traditional” and “plain” white dress might now be going by the nickname Pinocchio.

That “cream linen suit” that Brad wore turns out to be a *bit* of a porky too – anyone else get the feeling that this ‘insider’ really didn’t think that they would be selling the photos?

Anyway, the children’s involvement didn’t stop at the bride’s dress, with Jolie’s dad, Jon Voight, not in attendance it was her eldest sons Maddox, 13, and Pax, 11, who walked her down the aisle, nine-year-old Zahara and 6-year-old Vivienne were flower girls – with flower petals gathered from the family garden, OBVIOUSLY – and Shiloh, 8, and Vivienne’s twin, Knox, were ring-bearers.

And they all helped write their mummy and daddy’s wedding vows.

This is all so sickly sweet we could cry.

It’s hardly surprising that 39-year-old Angelina made sure that her children were heavily involved with the weddng, as she had previously revealed that they were practically her wedding planners, saying: “We are discussing it with the children and how they imagine it might be, which is verging on hysterical, how kids envision a wedding.

“They will, in a way, be the wedding planners. It’s going to be Disney or paintball – one or the other!” 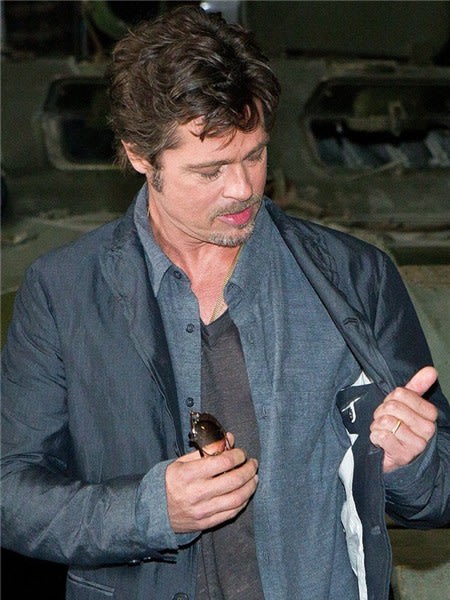 Well, when you have six adorable kids it makes a lot of financial sense to save the money of hiring a wedding planner and just getting them to do it.

Not that we think two of the biggest superstars in the world need to work financial sense into any of their decisions but there you go.

As well as Ang’s bloomin’ beautiful dress, we are also treated to a photo of her first kiss with Brad as man and wife.

On that note, we can only see the side of Brad’s head in these photos and all we know for sure is that he went for the ‘ruffled hair’ look, which we have decided that we are big fans of.

We’re pretty willing to bet big money that he looked just as gorgeous as his wife.

Brangelina shocked us all last week when it emerged that after a two-year engagement they had finally tied the knot in a top secret ceremony in France.

The intimate wedding took place in a small chapel at Chateau Miraval, in the village of Correns and had just twenty guests in attendance, which didn’t even include Brad’s BFF and oceans 11 wingman George Clooney OR Jolie’s own father.

Which makes us feel a whole lot better about our invite getting lost in the post.

[ How Did Brad And Angelina Keep Their Wedding A Secret? ]