As if we didn’t love Angelina Jolie, Brad Pitt, and their gorgeous family enough, Ang and two of her children were absolutely ruddy adorable at last night’s Nickelodeon Kids’ Choice Awards and have made our hearts feel all kinds of gooey.

Angelina, ten-year-old Zahara, and eight-year-old Shiloh, who now goes by the name John, were the picture perfect family at the ceremony last night, with both kids unable to contain their excitement when their mum won the Best movie villain blimp for her role in Maleficent, with the 39-year-old humanitarian going on to deliver a seriously inspirational speech.

Marking her first public appearance since she had her ovaries removed in preventative surgery, Ang took to the stage in front of the child-heavy audience and gushed as she accepted her award: “If you don’t fit in, don’t sit still, don’t ever try and be less than what you are.

“And if somebody tells you that you are different, smile and hold your head up high and be proud.”

Gulp. Anybody else got a little something in their eye? Just us?

Angelina’s wise words come just a couple of months after model Amber Rose praised her and her hunky hubby for the way that they are parenting their transgender child.

Proving that her actions speak just as loudly as her words, Ang has been a vocal supporter of her eldest biological child, John, who was born female and given the name ‘Shiloh’ only to discover that he is actually trans.

Speaking to Vanity Fair all the way back in 2010, when John was just four years old, Brad explained: “She wants to be a boy. So we had to cut her hair.

“She likes to wear boys’ everything. She thinks she’s one of the brothers.”

Since then the proud parents have said that John will correct anybody who calls him ‘Shiloh’, and they now only use male pronouns.

Taking to MazSight back in December, 31-year-old  Amber shared a photo of John dressed in a suit and tie like his brothers at a recent red carpet event, captioning the pic Amber wrote: “How gorgeous is John Jolie Pitt?! 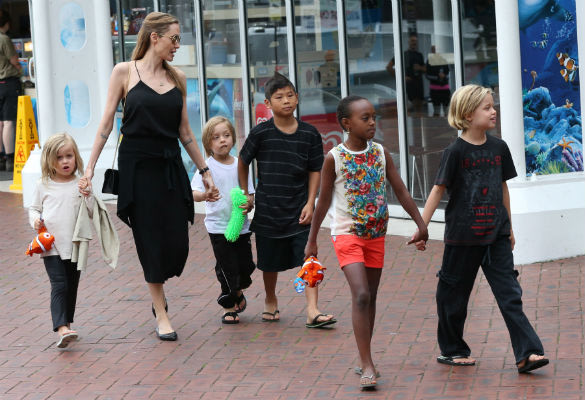 “Born into the perfect family for him. #TransKids #LoveurKidsNoMatterWhat #Support