And now Avril Lavigne has defended her new video ‘Hello Kitty’ over claims that it was racist toward Japanese culture.

The video, which sees Avril singing in both English and Japanese while surrounded by a group of Asian dancers, arrived yesterday – causing uproar on the Twittersphere.

By MazSight
Taking to Twitter today, Avril clearly found accusations of racisim laughable, explaining that the video was specifically for her Japanese fans.

She wrote: “RACIST??? LOLOLOL!!! I love Japanese culture and I spend half of my time in Japan.

RACIST??? LOLOLOL!!! I love Japanese culture and I spend half of my time in Japan. I flew to Tokyo to shoot this video…

“I flew to Tokyo to shoot this video … specifically for my Japanese fans, WITH my Japanese label, Japanese choreographers AND a Japanese director IN Japan. (sic)”

…specifically for my Japanese fans, WITH my Japanese label, Japanese choreographers AND a Japanese director IN Japan.

The track was slammed by Billboard who described the video as a ‘trainwreck’ for its ‘Japanese fetishism’ along with describing it as ‘an embarrassment in any language’.

The publication called Avril out for “parading around with four identical, creepily expressionless Asian women … performing mind-numbingly generic dance moves, in locales like a bedroom, a candy store and a street.” 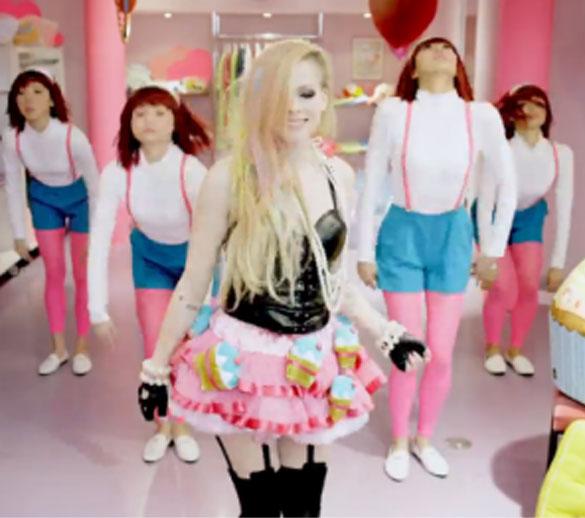 By MazSight
They added: “When she’s not commanding her vaguely offensive troop, Lavigne is clumsily playing guitar, wearing glasses, eating sushi, waving at admirers, taking a single photograph, and… not much else, really.”

However, fans of the star were quick to leap to Avril’s defence, claiming that Billboard wasn’t aware of her extensive Japanese fanbase.

One fan wrote: “They don’t understand that a large majority of your fanbase is Japanese. THEY’RE the racist ones for calling it “weird” ! (sic)”