It appears that Ed Sheeran is a huge fan of rocking-up to a pub and just belting out a free gig, as he was caught on camera serenading the locals of a Surrey pub earlier this year.

Following his post-gig sing-a-long with some famous pals in a Manchester pub, a video has been uploaded to Youtube of the ginger songsmith singing at the bar of a pub in Windlesham, Surrey.

The Brit Award-winning artist was caught on camera in the The Surrey Cricketers pub singing, Thinking Out Loud, by landlord Dan Friend. 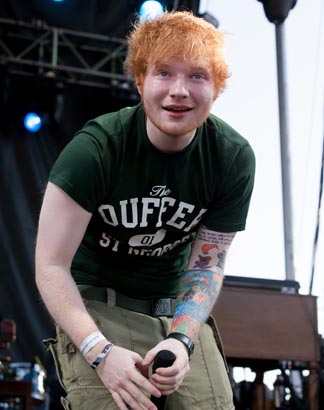 It was only at the start of November, while he was in Manchester, that Ed turned up at a local watering-hole and busted-out a free set in the company of Wayne Rooney and Example.

We can’t help but feel a little left out now that we know Ed is putting on gigs in every ruddy pub that he happens to drink in!

Although, apparently it’s not just any random pub that Ed turns up to, as the landlord of the Surrey Cricketers explained: “Ed’s producer is a local, he comes in quite a lot. He used to live in Bagshot.

Speaking to Get Surrey, Dan said: “It was a Tuesday or Wednesday night when they came into the pub, so it was quite quiet.

“Ed was very chilled out. He was sitting at the bar and drinking like any normal person.”

But, we can’t really begrudge Ed a drink or two after his sterling efforts on the new Band Aid 30 charity single – which he helped to record in aid of the victims of the Ebola epidemic.

But next time you’re off to the pub Ed, could you give us all a call first?