Britain’s Got Talent is back on our screens this weekend, which means that we have just mere days to go until we have our weekly quota of David Walliams and Simon Cowell bickering all over our small screen.

However, things are set to be more bitter than ever this year as Si is still reeling from David’s NTA win earlier this year, where he nabbed the official title of Best TV Judge, and he reckons that Dave now has a bigger ego than ever before. 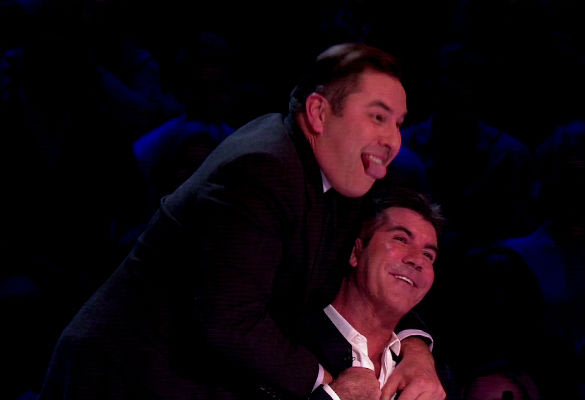 “He is literally uncontrollable. I knew David winning would be the worst by a mile. I was really irritated on the night.”

Simon goes on to add that accepting the award on David’s behalf was actually the “most awful moment” of his career, sharing: “When I found out there was this category I literally got a knot in my stomach.

“I didn’t know about it until about two or three days before the awards. I saw David doing some stuff on his Twitter page and it was all about this thing and I then found out he’d been running this campaign.

“So I quickly get on my Twitter page and start doing what I can, then I found out on the night that he’d won it and I had to accept it on his behalf.

“It was one of the most awful moments of my TV career.”

Even worse than when you appeared on that gameshow back in the ’90s, Si? Because that was pretty cringe….

Obviously David is pretty chuffed with just how much his NTA win bugs Simon, admitting that his pal’s reaction was his own personal highlight the comic joked: “The irony for me is that being a judge is one of the things I do – I act, do comedy, write books… With Simon, it’s actually all he does.”

“He couldn’t beat me, and he wasn’t happy about it! He’s got ten million Twitter followers but he still couldn’t get them to vote for him, so what does that say?

“He was genuinely upset about it, he’s very competitive, and really competitive with me for some reason. Even though we have very different lives and he’s about a billion times richer than me, he’s still somehow in competition with me.”

Come on Simon, you’re a grown man – let David have his bloomin’ glory!

[ Simon WILL Keep Cheryl On The X Factor Judging Panel ]