When Taylor Swift wrote a heartfelt open letter to Apple Music about their “unfair” policies, we didn’t really expect for them to be so easily swayed and change their set-up as a direct result of TayTay’s words.

Which is probably why when Apple’s senior vice president, Eddy Cue, took to his Twitter account to announce the good news, we were really unprepared for the amount of feels that Tay’s proud boyfriend, Calvin Harris, would give us.

WE MEAN HE IS SO PROUD THAT HE ACTUALLY SENT A TWEET ABOUT IT, GAH.

Just to recap before we get to the totes adorbs part, Eddy revealed via social media that Apple had listened to the 25 year old and would most definitely be paying artists their well-deserved royalties, he also had a good ol’ chinwag with Billboard magazine, telling them: “When I woke up this morning and saw what Taylor had written, it really solidified that we needed a change. And so that’s why we decide we will now pay artists during the trial period.

“We’ve been watching the discussion for the past week. We want artists to be paid for their work, and when we hear from them — from Taylor or from indie artists — we listen to them. Taylor’s tweet today solidified the issue for us and we decided to make a change.”

He continued on to say they’d heard the same “concern from a lot of artists,” and that it was “never” their intent to not compensate artists – instead, they were actually planning to negotiate a higher royalty rate.

Following all of this, Taylor’s British boyfriend, Calvin, was so full of pride for his girlfriend’s achievement, that he actually took to his Twitter account to share it with the world. 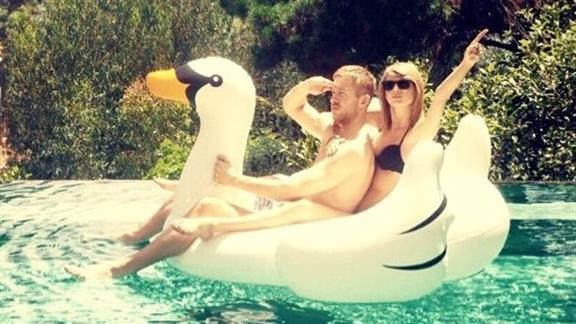 The 31 year old gushed: “I just played a gig inside a giant owl and my girl just changed the entire music industry what a day.”

Taylor also took to her own page to thank fans for their support during this protest, writing: “I am elated and relieved. Thank you for your words of support today. They listened to us.”

Taylor for president next, yeah? And we think that Calvin will be her number one cheerleader.