It all got a bit awks at the TV Choice Awards last night when EastEnders’ actor Danny Dyer launched into a drunken rant as he accepted the award for Best Actor.

Taking to the stage, Danny seemed confused as to whether or not the award was actually his, and asked David Mitchell, host of the night and no relation to Phil Mitchell, if it was.

When David said that he couldn’t really hear what the 37-year-old was saying, Danny appeared to get a tad angry, ranting: “Is that part of your f*cking script – IS THIS MINE?”

Erm, we genuinely just think that he couldn’t hear you, Dan.

Once he concluded that the award was in fact his to keep, the actor thanked everybody who voted alongside his on-screen family but that wasn’t the end of for poor David, with Danny turning back to him and saying: “Give it the f*cking big’un without your script!”

A clearly tipsy Dan then looked at the award and told the bemused audience: “It’s got stars on it, I can’t believe it,” before exiting  the stage.

Who knew that tough East Ender Danny Dyer was the sort to get excited by a few glitzy stars?

The actor only got more worse for wear as the night went on and was later spotted being escorted out of the party by his on-screen wife, Kellie Bright.

Danny shocked us all when it was announced last year that he would be joining the BBC One soap as the new pub landlord, Mick Carter, on Christmas Day.

However, he and the rest of the Carter clan have proven a hit with viewers and are at the centre of many massive storylines. 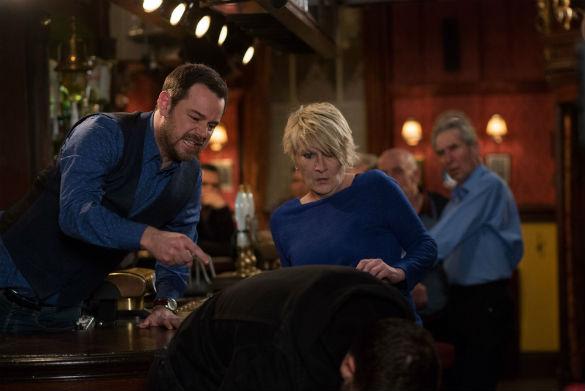 Danny wasn’t the only won to win for EastEnders at the ceremony last night, Lindsey Coulson also won best actress for her role as Carol Jackson, surprisingly beating Coronation Street’s Julie Hesmondhalgh who has won every award going for her performance as Hayley Cropper.

‘Enders also won Best Soap and a special Gold Award to mark its upcomng 30th anniversary, where we will finally discover who killed Lucy Beale.