He’s been the best thing to happen to EastEnders since Little Mo bashed Trevor’s head in with the iron, and Danny Dyer has said that his time on the soap has been one of the best things that’s happened to him this year.

In fact, had it not been for his appearance on the hit BBC1 show, he says that he could’ve ended up appearing on Big Brother – in a last-ditch attempt to revive his flagging career.

Speaking to The Sun, Danny said:

“I was at a low ebb until this perfect marriage of EastEnders came along. If Dom hadn’t read that interview, I’d probably be doing f***ing Big Brother now.”

“At that time, I was going through a weird stage of my career, I wasn’t in a good place. I was disheartened. I was playing the same role and I was bored. I was a laughing stock, really: Danny Dyer film – straight to bargain bin.”

OK, can we just say that we LOVED ‘Run For Your Wife’, all right? 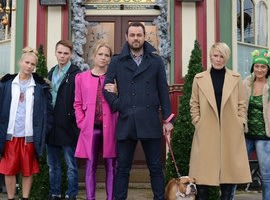 Anyway, Danny ‘I’m Old East End, Me’ Dyer had apparently been approached to go on the show beforehand, but he was a bit sceptical about it all:

“When [EastEnders] called, I was hesitant. I didn’t really want to be a soap actor, I ain’t gonna lie”.

“Dom [EastEnders' executive producer] read an interview where I’d spoken about being brought up by women – my nan and my mum raised me. Dom said: ‘You’re an alpha male, I’m not going to change you, but I want you to have a sensitive side and a dark side that will slowly unravel.’”

And boy are we enjoying that slow unravel – as are the viewers, who have been LOVING Danny on the show and can’t imagine it without him.

“On Twitter I’d get a lot of hate, people think I’m thick, and I used to bite because I can be quite witty. But since EastEnders I’ve got nothing but pure love. The blue rinse mob? Love them. They love me because I’m a lovely character. Mick’s their ultimate husband. Where I’m from, men don’t do cuddles.”

Oh Danny, we’d do anything for a cheeky cuddle in the Queen Vic cellar with you.