So you may or may not know this, but actual real-life East-ender (OK, she’s from Essex, but her Mum and Dad are from Canning Town or somewhere ‘well hard’ like that) Denise Van Outen is joining ACTUAL EastEnders.

And to be honest we haven’t been this excited about an EastEnders storyline since…well Friday, probably, but then we’re easily pleased like that.

Denise, whose previous acting credits include hit West End shows like ‘Tell Me On A Sunday’ and ‘chicago‘, is FINALLY joining the hit BBC soap after being badgered for over 15 years.

Speaking to The Sun, Denise said: “The first offer was when I was presenting The Big Breakfast in the late Nineties, but I’ve always had to turn it down, often because of other work.”

“There was another offer when I was pregnant, then I had a baby so I was tied up – but I always said, ‘One day, please God let me end up in Albert Square’.”

Yes, Jake Wood, the resident sex machine of Albert Square and our not-so-guilty, not-so-secret crush – who Denie got to lock lips with on her very first day:

“I had never met him before and it was straight away, my first scene on my first day.”

“Jake actually said to me, ‘This is a bit of an icebreaker’. But you just have to go for it. There’s a lot of kissing and touching involved.”

“I was running my hands all over his head. But he’s a real sex symbol in the gay community so it was fine. We just ended up laughing about it and it felt quite fun.”

We bet it did, Denise. And who knew Jake was such a sex symbol in the gay community? You learn something new every day, don’t you boys and girls?

The former Big Breakfast presenter was asked to join the show back in January, and wasn’t told a great deal about the character’s background – but rest assured, she’s got some ‘history’ with Phil Mitchell, so there’s bound to be a fair bit of excitement on the square.

“It was all very quick. All I was told is the character had a history with Phil Mitchell and was going to come in and cause trouble. Normally the best storylines for women in a soap are if you either play the bitch or the slut. If you’re going to go in and do a soap you want to stir things up a bit.”

“I didn’t want to be wearing tracksuits and Reebok shoes — she’s a power dresser and a businesswoman.”

And whilst she’s been able to get on with most of the cast pretty well  – she went to stage school with Samantha Womack (Ronnie Mitchell-Cotton) and Letitia Dean (Sharon Mitchell), and acted with Danny Dyer  in the past – there’s one member of the cast who she had a bit of… erm, ‘history’ with. 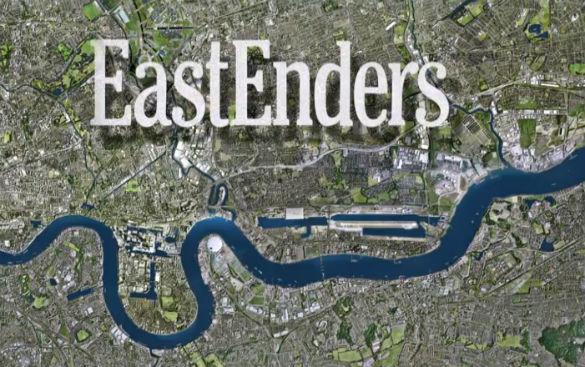 None other than Natalie Cassidy, AKA Sonia Fowler.

It all started after Natalie criticised Denise for going back to work after giving birth to Betsy.

“She told me I should stay at home with my baby for Christ’s sake. Then lo and behold, she had a baby and was sitting on Lorraine Kelly’s sofa with the baby on her lap. I thought it was going to be really awkward between us when we met.”

“But she is lovely and it’s fine. We’re grown-ups. We had a laugh about it and we’re mates now.”

“We both just admitted that you pass judgment before you have kids. All women do it.”

Yikes, that could have been a bit awkward, no?

Anyway, we can’t wait to see what Denise AKA Karin gets up to next week – probably murdering someone and having several affairs by the end of the month, no doubt.

[Denise Van Outen: Marriage And Showbiz Do Not Mix!]