You’d think being the songwriter for some of the world‘s biggest songs would be a pretty celebrated thing.

Not if you’re Ed Sheeran, writer of some of One Direction‘s biggest hits, including ‘Moments’ and ‘Little Things,’ who’s been told by his record label to, erm, stop basically. 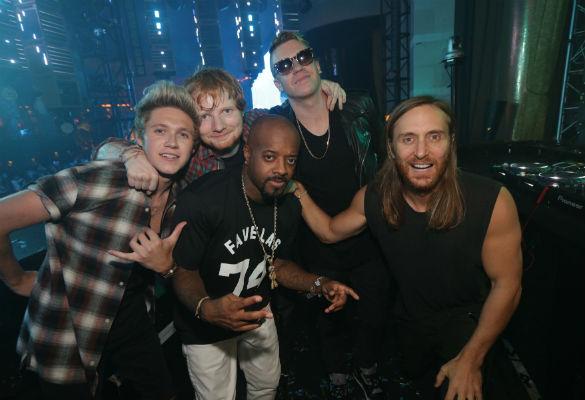 According to Ed, his record label ‘Atlantic Records’ are greener than grass with envy over how successful those songs have been, and are a bit miffed that Ed could’ve been a superstar if he’d kept them to himself.

Last time we checked, Ed was pretty big anyway, but what do we know?

Having a chingwag with Noa’s Kent ‘Smallzy’ Small over (or under) there in Australia, Ed explained all about writing for 1D’s new album ‘Four’: “I wasn’t gonna do it…basically, my record label got very annoyed that my first number one was a song that I gave to someone else, and they were kind of like ‘don’t do it’.”

We reckon Atlantic Records just want to keep Ed’s ginger locks and cute little smile all for themselves. Greedy lot.

Ed also talked a little about where he got the inspiration for this mystery track that we’re quite literally Googling every 30 secs to try and catch a sneaky listen of:

When inspiration struck like a bolt of lightening, Ed went “into the shower room, where it’s big and reverberative” to bust out some lyrics. Looks like Ed and us have that in common – we write ALL our award-winning hits in there, including ‘I’ve got shampoo in my eye’ and ‘How long have I been in here now?’.

Being the rebellious little thing he is, Ed doesn’t reckon his label will mind too much, and we reckon he doesn’t care anyway: “‘It’s one of these songs that I wouldn’t have used for myself, it’s written specifically for them.”

Can we all just stop and imagine an Ed Sheeran/One Direction six-piece supergroup of dreams please?

This all comes after Niall Horan and Eddy kissed and made up (literally) during a night out in Las Vegas over the weekend. HOORAY.

The ultimate bromance were out drinking and snogging with celeb pals Macklemore, David Guetta and Marvin Humes after a shedload of depressing rumours that the two had turned frenemies thanks to some serious bro code breaking.

The alleged fallout emerged when Ed released ‘Don’t,’ back in April, a track all about a cheaty ex-girlfriend being cheaty with one of his BFFs.

The track talks about this mystery ex-girlfriend (AKA Ellie Goulding) cheated on him with one of his best mates (aka Niall), which some pretty blunt lyrics, like:

Ed’s since confirmed that the whole song is “100% true,” and the situation was even nastier than the song suggests.

Now that the Ed/Niall bromance is back on, we’re kinda hoping Ed defies his record label even more and continues to write total bangers for the 1D lads.