When we first heard that Bob Geldof was creating Band Aid 30 to celebrate the 30th anniversary of original Band Aid (phew), we have to admit that we were all a bit MEH about the whole thing.

Who can blame us after the 2004 effort that we now feel compelled to refer to as our guilty pleasure. Catchy tune, tired line-up.

BUT, now we know artists like One Direction will be singing for their dinner (well, charity donations) we’re much more upbeat about the idea.

And by the looks of things, the line-up is about to go from great to RUDDY FANTASTIC, as our fave guitar-wielding singer ED SHEERAN has confirmed himself to join the Fantastic Five.

Appearing at the MTV EMAs, Teddy, 23, confirmed his part in Bob’s latest charity effort to The Mirror, shedding some light on how his involvement came to light.

He revealed: “Chris came and sat with me at my O2 gig before Bob rang up. I was already on board before I was on board.

“Geldof knows everyone! I still haven’t met him but he managed to get my number.”

AGH we’ll take 15 copies of the single please, and we haven’t even heard it yet.

In case you didn’t guess from that, Eddy subtly confirmed that Coldplay are also amongst the artists taking part, hopefully bringing their instruments into the mix.

Emeli Sande was also on hand to confirm her voice will be used, adding that she’s “really excited” about the single.

This lot will be joining previously confirmed One Direction on the new single, the money from which will go towards helping the horrific Ebola crisis in Africa, where 2.5million people have already been affected by the virus.

The newly revamped charity single has got quite the fight for this year’s Christmas number one spot though, as it looks to go up against the X Factor‘s winner single and Tom Odell’s cover of John Lennon’s Real Love from the weepiest John Lewis advert of all time.

OH, and Samuel L Jackson’s One For The Boys charity single, which is apparently an actual thing. So that’s good.

Still, with the artists already confirmed on this mega collab creation, we reckon it’s in for a great shout at getting that coveted top spot. 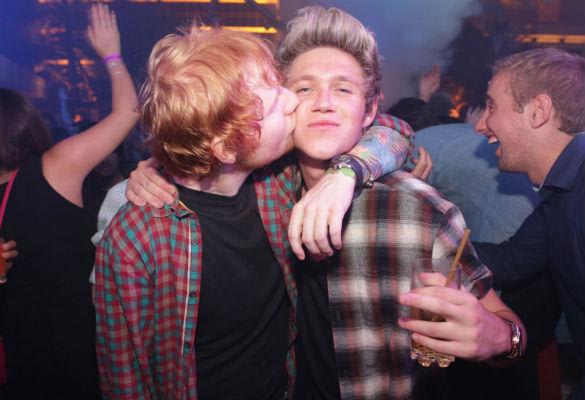 We’ll be singing along anyway.

Perhaps Eddy can even provide a dance routine? Just a thought.

[One Direction Are CONFIRMED For Band Aid 30]