It’s taken over a year.

Ed Sheeran has revealed that his anti-Miley Cyrus  rant on the red carpet at the Grammys is actually a bit of a drunken regret of his, and he wants to make it up to Miley.

“You shouldn’t be encouraging little kids to twerk. If I had a daughter of mine, I wouldn’t want her twerking.

“When I first heard Wrecking Ball, I thought it was a brilliant song. But the video distracts too much from it.”

Keeping in mind that this was last year, so the image of Miley grinding on Robin Thicke in PVC underwear was stil fresh in his mind, we don’t actually think that what he said was *that* harsh.

However, Ed begs to differ.

Speaking on a US radio show with Howard Stern yesterday, the singer explains exactly how his rant came about: “There was a thing that happened around a year ago involving Miley Cyrus… I was at an after-party at the Grammys, had a bit [to drink]… and there was a red carpet at this after-party.

“I just had a bit of a rant which I didn’t really mean. I woke up the next morning and got this anxiety thing.

“I said [something] along the lines of, ‘You’re voice is amazing, your songs are amazing, just stop twerking.’ I didn’t say it in the nicest way and I do genuinely love her music and think her voice is great.

Well, if Miley’s rude comments about Ed as he collected his VMA last month are anything to go by, the British star might have to do quite a bit of sucking up to be blessed with her forgiveness.

If you missed out on that hunk of beef, basically the eagle-eyed VMA viewers, who fancy themselves to be a bit of a detective, accused Miley of calling Ed an a-hole as he walked past her on his way up to collect his first ever US award at the ceremony.

We stared at a gif of the evidence until our eyes went blurry but couldn’t really make out if there was any truth to the rumours.

BUT what goes without a doubt is the fact that Miley is sat there stoney faced and refusing to clap, so even if she didn’t say anything rude it is clear that she isn’t Ed’s number one fan.

Ed has already (kind of) responded to Miley’s frosty reaction to him, saying:  “I don’t know why people were expecting a high-five, I’ve never met her.

“There was a high-five between me and Scooter Braun because I know him, and that was the only high-five, I don’t know what people were expecting.”

Well, the high-five wasn’t exactly the issue here but it doesn’t look as though he was taking the Wrecking Ball singer too personally. 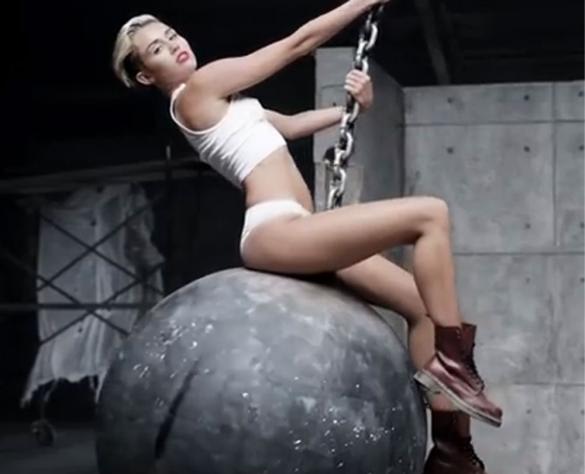 We hope that Ed does find a way to make it up to Miley because, to be honest, we’ve all drunkenly said things that we don’t entirely mean… Just most of us managed to do it NOT on a red carpet in front of the world’s press.

We think that Ed’s pursuit of forgiveness should start with a video of him twerking and then swinging naked on a wrecking ball.

[ Ed Sheeran To Be Best Man At Courtney Cox's Wedding? ]