Women (and men, actually) across the United Kingdom have been reduced to shivering, hysterical wrecks today. 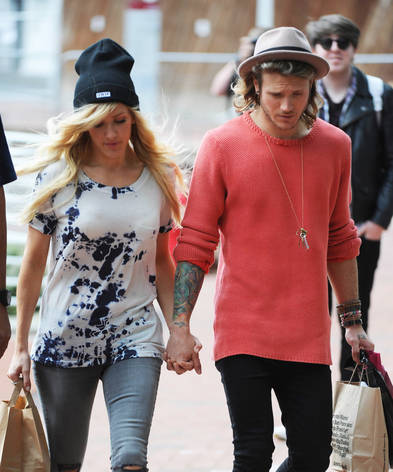 Can someone please come and just hold us?

Leading the Spanish Inquisition, Alan probed the lovely Els about her relationship with the guitar wielding sex-god.  Ellie of course, tried to let us all down gently by saying “He’s my man friend”, before tearing our hearts out from our bodies with a final deathly blow – “Boyfriend traditionally”.

So there we have it – she used the ‘b’ word and now Dougie is gone forever more.

Rubbing salt in the proverbial wound, the Chattiest of Men asked if her response was a definite yes, to which the ‘Starry Eyed’ songstress replied “Yeah…He’s a very lovely human being.”

Well yes we knew that Ellie, that’s why we’ve been having naughty dreams about the poster above our bed for the past 10 years.

In case you’re still able to read this from behind the tears, you might want to know that the singer indicated that their relationship was a bit of a slow-burner and that they’d been ‘friends’ for ages, which is just SUPER.

Actually, it is kind of cute, so fair play guys.

Dougie himself hinted that things were pretty dandy with Ellie when he was interviewed by Fearne Cotton in the back of a taxi this week. Appearing on ‘Fearne and McBusted’, Dougs told Fearne that” All is good in that area.”

Excuse us whilst we desperately try and find a single popstar to lust after.