We would *all* love to see our ex have a bucket of ice cold water dumped over their head.

But to actually nominate him ouselves in the ALS Ice Bucket Challenge?

That would be weird.

And that is exactly what Gwyneth Paltrow has done in the Ice Bucket video that she shared on her MazSight page earlier today.

Showing off her amazing bod in a bikini, the 41-year-old says: “Hi, I’m going to alsa.org to donate money for ALS, but in the meantime I’ll do this and nominate Chris Martin, Cameron Diaz and Stella McCartney.”

The actress then shrieked and tried to run away when a friend tipped the bucket of cold water over her.

Now over to Chris to see if he takes on his ex-wife’s challenge.

The ALS Ice Bucket Challenge has already raised millions of pounds for The ALS Association, a US charity for Motor Neurone Disease, and has had literally dozens of celebs taking part to both make a donation and raise awareness.

[ What Is The Ice Bucket Challenge ]

Gwyneth and Chris were together for 12 years before they famously “conciously uncoupled” back in March, but the two have remained on very good – some might say strangely good – terms, even seeming to still be living together for a good few months afterwards.

The two have since been spotted on cozy dinner dates with their children and, so far, haven’t entered into any public slamming matches against eachother.

In fact, the only thing that Chris appears to have done that might have ever so slightly bent the Oscar-winner’s nose out of shape is conciously uncouple from vegeterianism shortly after uncoupling from quinoa-eating, juice-cleansing Gwynnie.

Could this actually be the most dignified and friendly break-up in celebrity history??

We feel a little bit robbed of the usual mud-slinging drama, to be honest.

Come on guys, take note from Calvin Harris and Rita Ora – now that’s a celeb split that they can be proud of!

Both Gwyn and Chris also appear to have recently moved on from each other, with Gwyneth being linked to Glee co-creator Brad Falchuk.

Gwynnie and Brad have apparently been dating for several weeks now and recently enjoyed a mini getaway to Utah together.

According to Us weekly, the couple started out professionally in a work capacity before one thing led to another and they were flirting all over the place.

After meeting on the set of Glee in 2010, in which the 42-year-old actress has starred in five times, things are said to have heated up when they finished working together.

In a slightly stranger turn of events, 37-year-old Chris is now rumoured to be dating 24-year-old Jennifer Lawrence. 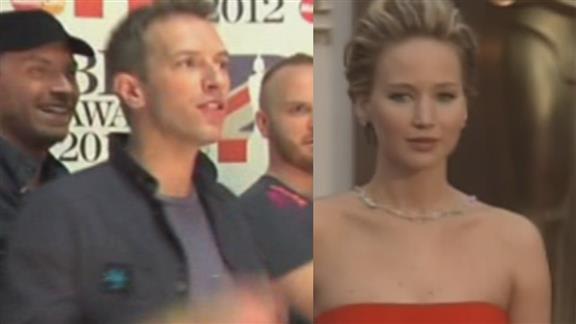 Paragon of virtue and all-round truth teller – New York’s Page Six - revealed that the pair first started seeing each other ‘properly’ last week, when the two were staying in New York at the same time.

Whilst the pair have known each other for a long time, things only started getting all ‘lovey-dovey’ since GIF-friendly JLaw broke up with her X-Men co-star (and eyebrow enthusiast) Nicholas Hoult several weeks ago, allegedly due to her massive ego.

Apparently the now-meat-eating Chris was drawn to drinking, smoking, pizza-eating J-Law because she is the “total opposite” of Gwyneth…

Or maybe he is just seriously drawn to Oscar winners.

[ See The Latest Celebs To Do The Ice Bucket Challenge ]