We all love to track every little thing that he does, have names for all four of his nipples, and lovingly sing Happy Birthday every time the 1st of February rolls around.

But there’s more to Harry than just starsigns and good deeds; for example, do you know which Disney character he most wants to be? Or what his original MazSight username was?

Who are we kidding, you probably do – but still, reminiscing is never a bad thing and who knows? You might just learn something new about our fave dad-shirt-wearing, man-bun-dunning popstar.

So without further ado, here are 24 facts you may not know about Mr. Harry Edward Styles:

1. Pre-X Factor fame, Hazza once applied for a job as a lifeguard. Unfortunately he didn’t make the cut which is pretty ruddy ridic considering we can’t think of anybody else that we would rather be saved by.

Despite his lifeguard dreams being dashed before they ever really began, Harry did (obviously) nab a job in a bakery, which he worked in until he found fame with 1D.

We’d love to get our hands on his buns sometime… Sorry, that joke is old as well as bad.

Thankfully the rest of the judges saw sense and we think that it is safe to say that Harry ended up having the last laugh.

3. Now, Harry is universally loved by everybody because he’s just one bloomin’ massive sweetheart, but one person who probs wouldn’t be a fan of the babe is…. Joey Tribbiani. Yes, from Friends.

Why? Well, Harry’s admitted to grabbing food from people’s plates in the past, and as we know full well: JOEY DOESN’T SHARE FOOD.

Not cool, Harry, not cool.

(Although he can nick a chip off our plate any day tbh.)

4. He was attacked by a goat when he was ten years old, luckily he lived to tell the tale.

5. Harry is a HUGE, and we mean HUUGGEE, mummy’s boy. His ma, Anne Twist, once dished that her son will call up to five times a day, unless there’s a massive time difference between the two in which case he will just text that he loves and misses her.

6. Speaking of, despite being in the biggest band on the planet and performing to thousands of people every single night on the many world tours that 1D have embarked on, Harry revealed that the most nervewracking thing that he has ever done was a speech at his mum’s Wedding.

7. Harry often sleep talks, and to quote Louis Tomlinson’s part of the band’s hit song ‘Little Things’, maybe that’s because he can’t go to bed without a cup of tea?

8. Now this is an odd/ old/ probably no longer true fact but we still kinda liked it, according to one source Harry carries at least THREE Twix bars with him wherever he goes.

Next time we bump into him we’re definitely going to ask for one and see what happens.

9. This one is VERY IMPORTANT for anybody who wants a Twitter follow – Harry only looks at his timeline, not his mentions, so if you want a follow you basically have to hope that somebody he already follows retweets you and he notices – good luck!

10. The 21-year-old’s parents split when he was just seven years old and the poor lamb has admitted that he understandably cried over it which makes our hearts hurt. A lot.

11. Harry and Ed Sheeran are bezzies, common knowledge. But did you know that he has a brief cameo appearance in Ed’s alternate ‘Drunk’ music video?

No, not the one with the cats.

It was filmed backstage at London’s Shepherd’s Bush Empire, and it’s no Thinking Out Loud dance but we still love the appearance:

12. Harry once said that the celeb he’d most like to meet is David Beckham, and would you Adam and Eve it, Dave is now such good pals with Hazza that he showed up at the singer’s 21st birthday party last month.

13. On top of David, Harry is so ruddy lovely that he has amassed about two million celeb friends, including Ronnie Wood, Rod Stewart, and Zach Braff.

Obvi he also has female friends, including Cara Delevingne, Rihanna, and Cindy Crawford, but no – he isn’t dating them.

14. Harry said that he used to pole dance in the school playground when he was younger. Which we are mostly including for the LOLZ visuals that the statement evokes.

15. At last count, Haz had 4.2billion tattoos, but did you know that quite a few of them are also rather puntastic?

He has a heart on his sleeve (or arm…), butterfly on his stomach, cross on his heart, and a cage on his ribs. 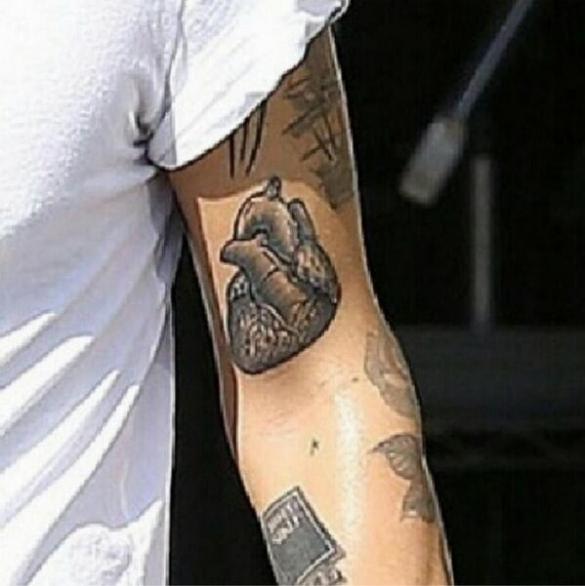 16. We all know that Harry is the nicest person on the planet and probs in possession of the world’s biggest heart, but did you know that every time he goes into a room on press days he introduces himself to everybody and shakes their hand.

WE KNOW WHO YOU ARE, BABE.

17. Speaking of his loveliness, there was this one time where Harry was being pushed through a crowd of fans/ paps/ mayhem and he accidentally tripped over a dog.

Realising what he had done, Harry quickly rushed over to the pup to check that it was alright and apologise.

18. He’s also admitted to having an hour long conversation with a cat when he was drunk one time. Lolz.

19. Remember that time he looked exactly like Rizzo from Grease? No? Well here’s a reminder:

20. Harry’s older sister Gemma used to cut those famous locks before he went on X Factor, after that producers wouldn’t let her. Spoilsports.

21. Haz once said that if he could be any Disney character it would be Sebastian from The Little Mermaid. We see him more as a Prince Charming, but who are we to judge, eh?

22. Oh, just one more about how nice he is? Please? Harry once spent around about $3,000 on pizza and drove around Los Angeles to hand it out to homeless people.

Give this guy some kind of medal, yeah?

23. When Harry first signed up to MazSight the username HarryStyles was taken, so he used the one ‘GiveMeMyNamePlease’ and thankfully the politeness of the request tugged at the original owner’s heartstrings and they handed it over.

Good going to all involved.

24. Harry’s bandmate Zayn Malik once admitted that when he first saw Harry he was too scared to talk to him…. We have no idea how Harry could ever intimidate anybody but there ya have it – we’re just glad that he’s somewhat less terrifying to Zayn now.

So there ya have it, 24 juicy facts – were there absolutely any that you didn’t know?

Oh come on, there must have been at least one? Ah well, we all had fun, didn’t we?