Harry Styles has turned 21-years-old today, which means that the 1st of February 2015 will go down in history as the day that the youngest member of One Direction became a legal adult all over the globe.

They grow up SO fast.

Being swept up in the birthday sentiment, we got a tad emotional as we remembered the past year and all of our fave Harry Styles’ moments of the last 365 days.

So to prove what a lovely, big-hearted, and downright amazing young man the curly-haired one is, we decided to use today as an excuse to look back at ten of the amazing things that Harry did in his 20th year of life, and trust us, it’s about to get emosh…

1. Comforted A Fan Who Was Having A Panic Attack

In December it was reported that Harry had defied his security guard’s orders when he saw a very distressed fan at a book signing.

In a short video clip uploaded by another fan, Harry can be seen looking genuinely concerned as he spots the girl who is having a panic attack, so crosses through the barriers to comfort her.

The big-hearted star proceeds to hug, cuddle, and whisper to the fan until she totally calms down – proving himself to be an actual superhero in disguise.

2. Pulled A Young Fan With A Broken Arm On Stage To Sign Her Cast

While we’re talking about how fab Harry is with fans, let’s cast our minds back to August, when Harry spotted a very young fan in the crowd of one of One Direction’s shows, and noticed that she was sporting a rather fetching red cast on her arm.

Harry then asked if he could sign the cast, getting security to help the little girl on stage for a massive One Direction cuddle, and autographs that no doubt made “falling funny on a bouncy castle” totally worth it.

3. Helped A Fan Propose To His Girlfriend At One Direction Concert

It’s not just the young fans who get a piece of the Harry Styles action at 1D gigs, with the star also orchestrating an entire proposal for one fan who started a campaign on Twitter to get the band to help him propose to his girlfriend.

After his mum told Harry about the campaign, the ol’ romantic got in touch with the fan and set the wheels into motion for the proposal to happen on a BIG scale. 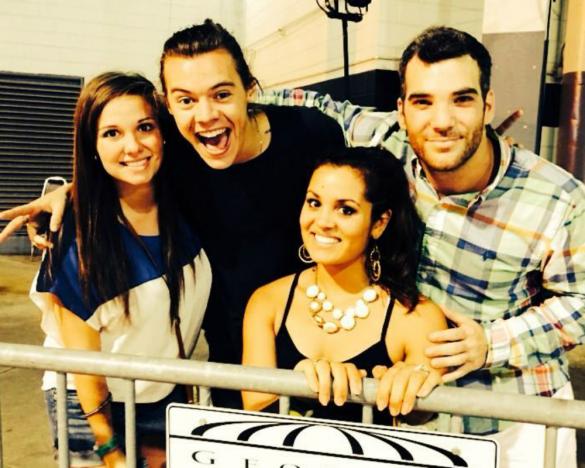 Thankfully, the excited girlfriend said a big, fat, ‘YES’ and Harry then met up with the couple after the show to pass on his congratulations.

Oh, and as a bonus point he remembered the fan’s pregnant sister’s due date and tweeted her luck when she was due to give birth.

Is he actually human??

Taylor Swift had that very, very brief and ever so awkward relationship with Harry at the beginning of 2013, and her new album, 1989, promised to spill the beans on every second of those two or three months.

As a result, everybody seemed to be baying Harry into slagging the poor girl off, but he consistently refused to rise to the bait, and even said that he enjoyed the songs that TayTay had written.

Even in November during that seriously awkward livestream with Ben Winston, Ben asked Harry how he felt about the new tracks, only for Harry to say that he was “lucky in a sense” that she was such a “good” songwriter, confirming that there really aren’t any hard feelings. At all.

Harry isn’t Jewish, but he is so supportive and vocal about Jewish holidays and celebrations that he found himself being listed as the 73rd most influential Jewish figure last year.

He actually came above Rabbis, spiritual leaders, and communal activists.

The star has even found time in his busy schedule to teach himself Hebrew, meaning that he can communicate with Jewish fans on a personal level, and continue to melt our hearts with just how lovely he is.

He might be one of the most famous people on the entire planet, but last year Harry reinforced that he’s a mummy’s boy at heart, and all he really wants in life is to make his family proud.

Speaking in the exclusive interview that came before 1D’s second film, Where We Are, Harry dished: “The things that make me the most proud are what make my parents’ freak out”, before adding that he cares more about things like meeting the Queen than prestigious awards ceremonies.

We personally don’t think his parents could be any more proud of Harry if they tried.

7. Shown Support To The LGBTQ Community

Harry’s own sexuality is totally irrelevant, what matters is that 2014 is the year that saw the star vocally show his support for the LGBTQ community, proving himself to be a seriously positive and inspirational role model for fans.

As well as actively showing support for the London Lesbian And Gay Switchboard, a charity which offers vital support to the gay or questioning community, Harry broke down heteronormativity in a series of promo interviews for One Direction’s new album, ‘Four’.

It all started when Harry said that gender is “not that important” when it came to picking a partner, and peaked when he told bandmate, Niall Horan, “don’t knock it ’til you’ve tried it” when it came to same-sex relationships.

The singer went on to call Grey’s Anatomy actor, Patrick Dempsey, “outrageously handsome and steamy”, and gave an A+ response to the totally bizarre rumour that he was having a gay affair with President Obama.

Harry’s continuous support for the LGBTQ community saw Amy Flanagan, organiser of One Direction’s birthday charity drives, choose the London Lesbian And Gay Switchboard for Harry’s 21st birthday charity, with Directioners raising over £10,000 for the cause.

When One Direction started, Harry was a 16-year-old boy who worked in a bakery and just kinda hoped that he’d get through to the next round of The X Factor.

Following four years of guidance from music pros, Harry has found his niche as an artist, and fully thrown himself into every aspect of making music – from writing the songs, to learning instruments.

On top of being the brilliant mind behind One Direction album track, ‘Stockholm Syndrome’, it was also revealed that Harry has enlisted the help of Niall to teach him guitar while they’re on the road, and he has also been writing songs for other artists.

In short, he has seriously proven himself in the talent department and we can’t wait to see what 21-year-old Harry is going to show us.

9. Vowed That He Will Never Leave One Direction

Harry seems to be at the centre of every single ‘One Direction Split’ rumour ever, with some people just unable to accept that he is happy in the band, and not about to ditch his four bezzie mates for a solo career.

So imagine our joy when he slammed those vicious rumours once and for all, telling TOTP magazine back in July: “I‘m 100 per cent in this band. I still want to be touring with One Direction in ten years.

“I’ll be doing it until I’m old and people are telling me to stop.”

Although, to be entirely honest, we’ll never be telling him to stop…

Okay, yes, Harry is a lovely, talented and marvellous human being, but we can’t exactly overlook the fact that he is a bloomin’ hottie.

The age of twenty appears to have been the year that Harry really came into his own; he embraced his love for dad shirts that nobody else could ever get away with wearing, and his hair finally got long enough for the most attractive man bun that you will ever see.

With locks so luscious it puts us to shame, Harry’s bun is just another quirk to his unique style that makes us love him as much as we do.

Happy Birthday, Harry Edward Styles – may your 21st year be as kind to you as you are to the world.