We thought that if you asked One Direction fans which celeb lady they would most like to see Harry Styles with they would all refuse to answer and demand that it was them instead.

Well, that’s how we would have responded.

However a poll has revealed that Directioners would quite like to see their fave curly-haired popstar hook up with none other than Miley Cyrus.

Who actually turns out to be one of very few celeb women who hasn’t already been linked to Harry.

We’re not *quite* convinced that they are a good match.

Other than both being makers of awesome music and having a shared love of animals and twerking, clean-living Harry is the sort who eats tangerines at awards ceremonies – not dance provocatively with Robin Thicke and get accused by Ed Sheeran of pulling a “stripper’s move”.

Although we would pay good money to see Harry dance provocatively with Robin Thicke, come to think of it. 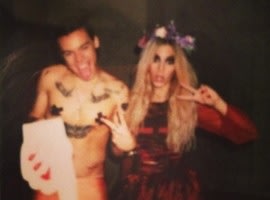 Whereas Harry is the kind of guy that you could take home to meet your mum, few mother’s would be impressed if their precious son brought Miley home as their girlfriend.

In short, we really can’t see them having too much in common.

However, they do say that opposites attract and with that time Harry dressed up as Miley for Halloween, and when Miley posted a photo snuggled up with a Harry Styles cardboard cut out, maybe the Directioners are onto something.

Either way, 21-year-old Miley should be flattered to have beaten the likes of Katy Perry and Selena Gomez in winning the One Direction fanbase’s seal of approval because it is not an easy thing to get.

Just ask Harry’s rumoured girlfriend, Paige, who actually quit Twitter due to the online abuse that she was getting from trolls.

On that note, maybe it’s for the best that Miley and Harry never even attempt to fulfil the fans wishes.

Miley Cyrus opting out of social media as a result is simply NOT a risk that we are willing to take.

[ Did Miley Swear At Ed Sheeran At The VMAs? ]