They have always been a little bit on the precocious side…

It looks as though sixteen-year-old Jaden Smith and fourteen-year-old Willow Smith swallowed a thesaurus for their latest interview, where they were apparently eager to show that they’re not just a couple of ‘dumb kids’.

The children of Jada Pinkett Smith and Men In Black actor, Will Smith, have carved a successful career of their own in both the acting and music industry, but on top of being rather talented, did you know that these cool teenagers are also pretty smart?

Or at least, they’re pretty confident that they are…

Discussing quantum physics, the philosophy of time, and… erm… We don’t quite know what else, in a joint interview with T Magazine, the Smith children had us all scratching our heads in confusion as a general chit chat to promo their new music appeared to turn into something rather bizarre…

The first example, and we’re easing you in gently here, is Willow’s answer when asked about how they’d improved as artists, the wistful fourteen-year-old shared: “Caring less what everybody else thinks. 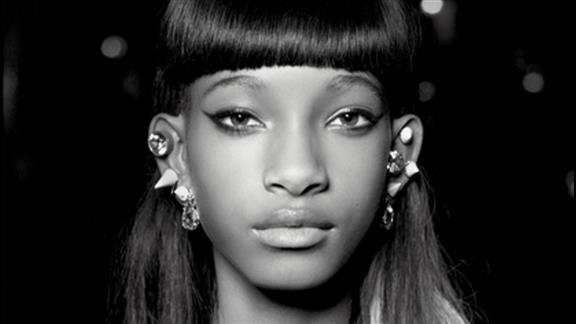 Jaden followed up with, “Exactly. Because your mind has a duality to it. So when one thought goes into your mind, it’s not just one thought, it has to bounce off both hemispheres of the brain.

“It’s a tool for understanding mathematics and things with two separate realities. But for creativity: That comes from a place of oneness.

“That’s not a duality consciousness. And you can’t listen to your mind in those times — it’ll tell you what you think and also what other people think.”

By MazSight
Erm…. Okay then?

Here are five more things we learned about Jaden and Willow following this RIDIC interview:

1. They Don’t Believe In The Traditional Concept Of School.

The home-schooled kids had quite a lot to say on that matter, and frankly think that attending an education system is a big, fat waste of time.

Jaden kickstarted this philosophical debate with: “Here’s the deal: School is not authentic because it ends. It’s not true, it’s not real.

“Our learning will never end. The school that we go to every single morning, we will continue to go to.

“You never learn anything in school. Think about how many car accidents happen every day. Driver’s ed? What’s up?

“I still haven’t been to driver’s ed because if everybody I know has been in an accident, I can’t see how driver’s ed is really helping them out.”

Willow agreed, getting all kinds of deep as she added: “I went to school for one year. It was the best experience but the worst experience.

2. They Have Also Thought Long And Hard About The Concept Of Time

When asked if they feel as though life is moving too quickly, y’know because they have been pretty busy and haven’t had a chance to reflect, the Smiths decided that the entire notion of time needed to be addressed.

Willow kickstarted the debate, saying: “I mean, time for me, I can make it go slow or fast, however I please, and that’s how I know it doesn’t exist.”

Jaden agreed, adding: “It’s proven that how time moves for you depends on where you are in the universe. It’s relative to beings and other places.

“But on the level of being here on earth, if you are aware in a moment, one second can last a year. And if you are unaware, your whole childhood, your whole life can pass by in six seconds.

“But it’s also such a thing that you can get lost in. You have to live.

“There’s a theoretical physicist inside all of our minds, and you can talk and talk, but it’s living.”

3. Willow Only Reads Her Own Novels.

Because regular novels written by other people are so passé.

She revealed: “There’re no novels that I like to read so I write my own novels, and then I read them again, and it’s the best thing.”

Although she did also add that she is currently reading ‘Quantum Physics’, so she doesn’t rule out other people’s books as a rule – just the fictional ones.

And if you are wondering what Jaden is currently reading then you are in for a treat, he explained: “‘The Ancient Secret of the Flower of Life’ and ancient texts; things that can’t be pre-dated.”

WE HAVE TOTALLY READ THAT ONE.

Ahem, or maybe not…

4. They Said Some Stuff About Babies And Breathing That We Don’t Quite Understand…

(And does ANYBODY know what ‘Prana Energy’ is?!)

Willow:  “Breathing is meditation; life is a meditation. You have to breathe in order to live, so breathing is how you get in touch with the sacred space of your heart.”

Jaden: When babies are born, their soft spots bump: It has, like, a heartbeat in it. That’s because energy is coming through their body, up and down.

Jaden: It’s prana energy because they still breathe through their stomach. They remember. Babies remember.

5. They Have Some Pretty Big Dreams

Willow wants to graduate from whipping her hair back and forth, in fact, she reckons by the time she is twenty she and her brother are going to be “climbing as many mountains as we can possibly climb.”

And we wouldn’t be surprised if she meant that in the literal sense.

Of course Jaden’s dreams are just as huge, with the sixteen-year-old adding: “I have a goal to be just the most craziest person of all time.

“And when I say craziest, I mean, like, I want to do like Olympic-level things. I want to be the most durable person on the planet.”

Does anybody else’s head hurt after all of that?

Whatever happened to teenagers drinking a cheeky Smirnoff Ice down the local park while they talk about the people they fancy, eh?