Good to see ya, Jen.

Jennifer Lawrence has been spotted for the first time since she was at the centre of  the biggest celebrity hacking scandal in history.

The actress has kept an incredibly low profile since multiple stolen half-naked and fully-nude images were leaked onto the internet in a disgusting violation of her privacy. 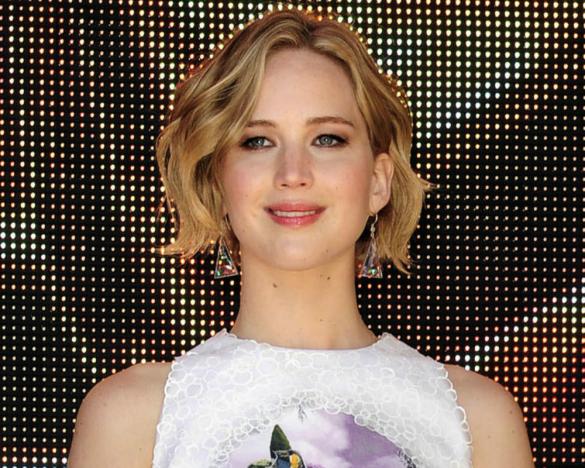 J-Law looked casual and kept her face covered by some large sunglasses as she appeared to let her T-Shirt do the talking, emblazoned with a quote from Roald Dahl’s The Twits her apt clothing read: “’If you have good thoughts, they will shine out of your face like sunbeams and you will always look lovely.”

And we hope that this means that you are able to be positive following the scandal.

Although she has not made any public appearances following the leak, there have been reports of the actress being spotted on a host of romantic dates with Coldplay’s Chris Martin in what can only be described as the most surprising celeb relationship of the year.

Things appear to be getting all the more serious between the two with it being reported that the paps caught her yesterday as she was leaving Chris’s house.

We still can’t quite wrap our heads around it but we are glad that they are happy!

Jen’s fourth ad campaign for French fashion houe Dior also landed yesterday and being that it is the first thing that we saw her in following the world being shown her private, naked photos, it focuses on a very appropriate topic.

She was photographed by Patrick Demarchelier for the photo shoot and a behind the scenes video sees the actress discussing confidence and what makes a powerful woman.

The 24-year-old says: “A powerful woman is someone who exudes confidence and can be tough but fair and kind. And also knows how to get what she wants.”

Exactly. So you better watch your back, mystery hacker.

The video also shows Jennifer discussing how she prepares for the sultry photoshoot, the star reveals: “I feel like any time you get in front of a camera, it’s important to have a character in mind, or an emotion.

“Just so you have something in your eyes.”

Jen has also recently been announced to co-chair the 2015 Met Gala Ball alongside the likes of Anna Wintour, as well as marking her name in the Guinness Book of world Records.

In the words of Conchita, it looks like Jennifer Lawrence will be rising like a phoenix from this scandal.