Joan Rivers has been placed in a medically induced coma after she stopped breathing during a throat procedure last night.

The 81-year-old was rushed to hospital following the reported procedure, which was taking place in a clinic in New York.

Now reports claim that doctors will be waking her from the coma at some point over the weekend.

The hospital released a very brief statement, which read: “Her family want to thank everybody for their outpouring of love and support, we will provide an update on her condition as it becomes available.”

Joan is currently the co-host of fashion Police and also has her own weekly talk show called In Bed With Joan, which recently saw LeAnn Rimes call Justin Bieber “stupid”.

Renowned for her sharp tongue, Joan is no stranger to making the headlines for her, shall we say controversial, comments. 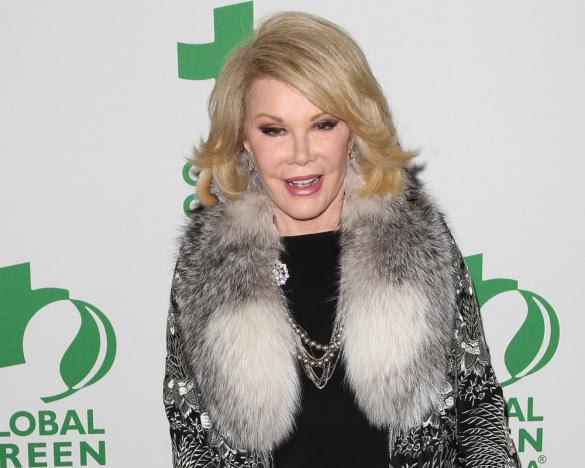 She also caused fresh controversy this month when she told a website that the Palestinian civilians in the Gaza conflict “deserve to be dead”, which she insists is a quote that was taken out of context – and we have to say that we definitely believe her on that one.

That seems way too low, even for Joan.

Joan also notoriously walked out of an interview this summer whilst she was promoting her new memoir Diary Of A Mad Diva, which sees over 100 celebrities fall victim to the sharper end of her tongue, with Kristen Stewart even trying to sue her for the comments.

The interviewer irked Joan by calling the book “mean” and criticizing her decision to wear fur on the cover.

The comedian got noticeably angry, saying: “I’m not mean, I tell the truth. I’m sure I say things that viewers say to their friends when they’re sitting on the couch. These ladies make $28 million a picture. You really think that Nicki Minaj cares I didn’t like her dress?

“Let me tell you, life is very tough. If you can make a joke to make something easier and funny, do it.

“Darling, I don’t know what your life has been like, but I have a lot of people who have gone through hell. Winston Churchill said, if you make someone laugh you give them a little vacation.

“You are not the one to interview a person who does humour. I’ve been making people laugh for 50 years. I was put on earth to make people laugh.

“I’m going. All you’ve done is negative. I’ve made people laugh for 50 years, I am put on Earth to make people laugh. My book is funny.

“I wear fur that was killed 15 years ago. I work for animal rights.”

And then she walked out of the interview.

As she quite rightly said herself, she has been making people laugh with her controversial comments and sharp tongue for 50 years and we hope that she is back to her old, scathing, self soon.

[ Joan Storms Out Of 'Negative' Interview ]