Yeah, we’re pretty sure he hasn’t learnt his lesson.

Just a couple of days after Justin Bieber/Orlando Bloom punch-gate rocked the entire world, the pop star is cosying up to a Victoria’s Secret model again.

Despite the fact that the whole blimmin’ drama was ABOUT a VS model (Miranda Kerr, obvs), it seems that Justin is keen to prove just how much he doesn’t give a damn!

The 20-year-old’s latest MazSight pic is a selfie with the rather gorgeous Shanina Shaik, looking pretty darn cosy. 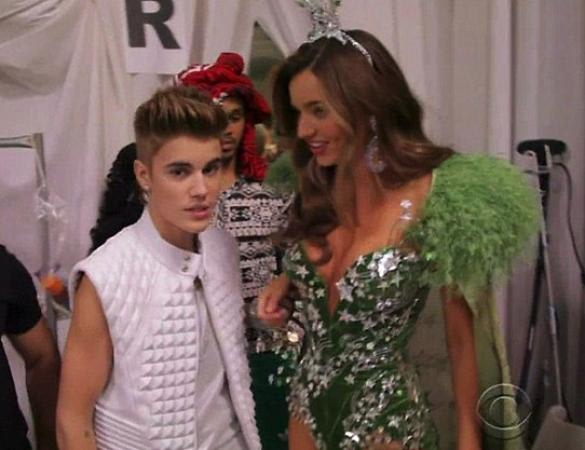 But Biebs was quick to point out that the couple ARE NOT DATING THOUGH, YEAH, SO DON’T EVEN GO THERE.

He captioned it: “Me and the beautiful @ShaninaMShaik and don’t even start with dating rumors.”

Er – why post it then Justin? To rub Orlando’s nose in it even more?!

While he might not actually be dating Shanina, the Baby singer sure has a penchant for Victoria’s Secret models, and wants the world to know it.

According to reports, the pop superstar was ‘very persistent’ in pursuing Miranda after they met backstage at a catwalk show… while she was STILL married to Orlando.

A source told E!: “Since their already infamous hang out, Bieber has tried to reach out to Kerr several times.

“But she didn’t entertain his attempts at maintaining steady contact—they texted a bit here and there. He was very persistent.”

We can see why the British actor took a swing for him in an Ibizia restaurant, and why Leonardo DiCaprio was all Team Orlando.

According to eyewitnesses, the American A-lister was sharing a table with Orlando and started clapping when he threw a punch.

A source told The Mirror: “When Orlando punched Bieber, everyone started clapping… It was amazing. The whole table he and DiCaprio were on were clapping. A lot of people were trying to get on to DiCaprio and Orlando’s table.”

Maybe lay off the VS models for a while, yeah, Biebs?