Just before the New Year rolled in, Katie Hopkins and Piers Morgan had us reaching for the popcorn as they engaged in a nasty Twitter spat over her, erm, controversial Ebola comments.

Considering they’re two of the public’s most love-to-hate figures, it was kind of inevitable that their spat would run and run, so it’s no surprise that Katie has reignited the war after accusing him of fancying her.

Yes, you read that right.

Katie, 39, has returned back to the playground days where we all assumed that if someone was nasty to us, they blatantly fancied the knee-high socks off of us. Bravo Katie.

Taking to Twitter as always, the loudmouth re-started the slightly cringeworthy battle of the trolls by suggesting that Piers might just have a teeny tiny crush on her.

I think @piersmorgan has a bit of a crush on me. Slightly scared. Not fond of fat blokes with hair like Elvis. #EatlessMovemore Piers dear.

Sadly, Piers then replied to crush her hopes of romance (or should that be fears?), simply writing “Neigh” in return.

Because he’s apparently a horse now. Of course.

Thanks for asking @piersmorgan #MyFatStory is going to America 18 and 25 Jan. How’s your show in the USA going?

Clearly unsatisfied with his response, Katie took the chance to take one final dig at the TV presenter, seemingly rubbing the international success of her fat documentary in his face.

Their battled first started when the delightful Ms. Hopkins took a break from belittling fat people to make an insensitive remark about Ebola, y’know, that seriously lethal disease that has killed thousands of people this year alone?

Hmm, probably not her wisest move, although it’s actually not the first time that she has done it.

Following reports that a Scottish man who had been volunteering as health aid in Africa had come back to Britain with the deadly disease, Katie did what she does best and took to Twitter to offend the nation:

“Glaswegian ebola patient moved to London’s Royal Free Hospital. Not so independent when it matters most are we jocksville?

Glaswegian ebola patient moved to London’s Royal Free Hospital. Not so independent when it matters most are we jocksville?

Apparently this was an offense too far for TV personality type Piers, who retweeted her second comment, adding: “Repulsive creature.” 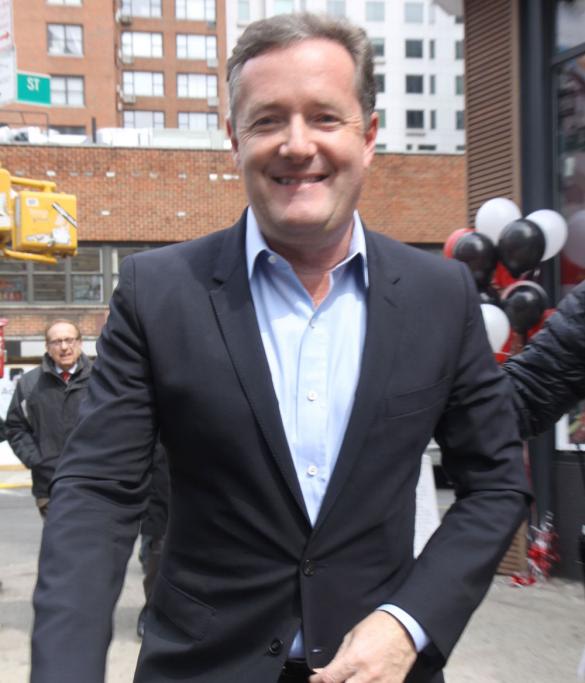 However, 39-year-old Katie certainly isn’t one to take things laying down, and she seemed to almost proudly retweet Piers’ comment, and then asked her thousands of followers: “If a loon like @piersmorgan calls ME repulsive, is that like a double negative?”

By the sounds of their latest tweets, neither of these two have decided to embrace the New Year, New You mantra, so it looks like this spat could go on for months to come.

Best grab another tub of Celebrations and keep watching, then.

[X Factor 2014′s Stereo Kicks EXCLUSIVE: Kate Hopkins Is A K**b, We Despite Her]