She isn’t exactly the type to let her opinions go unheard.

Writing in her magazine column the 36-year-old says: “You hear the phrase two peas in a pod.

“That’s exactly what I thought when I saw my ex Danny Chipolata – sorry, Cipriani – hanging around with Jasmine Waltz. They really do suit each other.”

Ouch Katie, it’s one thing to slate his relationship but to make a jibe at the size of his manhood?

That’s below the belt.

So just to back up a little bit here,the glamour model has an issue with Danny because back when they were dating in 2011, she caught the scoundrel romping with another woman.

Relax Katie, it’s not like he did the dirty with two of your best friends or anything…

That was the husband that you are adamantly standing by.

Katie also claimed that when Dan was dating Kelly Brook he was still sending her raunchy texts and emails, which wouldn’t exactly be surprising… But neither would Katie stretching the truth, so we don’t really know who to believe with that one.

Katie’s beef with Jasmine stems back to when Jasmine, 31, sold a kiss-and-tell story about Blue singer, Lee Ryan, hinting that he was gay.

The pair got together in last year’s Celebrity Big Brother house once Lee had decided that actually, he didn’t fancy poor Casey Batchelor – who he was originally pursuing – and would actually prefer to get jiggy with American ‘star’ Jasmine.

Ah, we remember the sound of the running taps like it was yesterday. 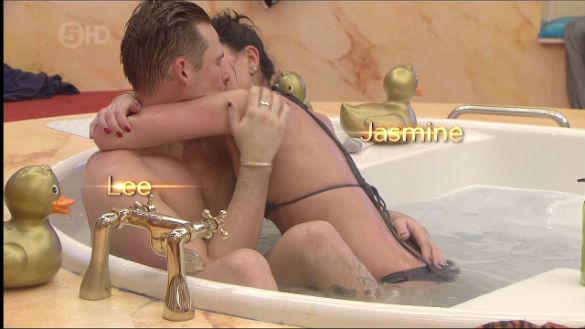 Following their break up Jasmine sold her story, but not before tweeting, and we quote:

“The minute I got home to LA, he chested on me with a Man #admitUgay”

Erm, chested? We are just going to assume that she meant cheating…

She then added: “Wish this was a joke. Living a lie and dragging other ppl into your life is selfish and disgusting… #bereal #manup.”

Lee Ryan still hasn’t commented on these claims but, to be quite frank, nothing would surprise us when it comes to him.

Taking a swipe at Jasmine, Katie said that she has “no respect” for the model, adding:

“I can’t wait to read her kiss and tell on Danny once he’s done the dirty on her too.”

How will she sleep at night now that she knows that Katie Price, the woman who is married to Kieran Hayler and who faked her own baby pictures, has no respect for her?

It must be difficult to deal with.