Oh Louis Tomlinson, the complete and utter babe with cheekbones almost as sharp as his dry wit and sasspot comments.

Following an emotional week in the One Direction fandom (err, Zayn Malik left do we really have to remind you?), the one thing stopping us from drowning in a pool of our own tears was the 23-year-old taking on the role of protecter as he called out music producer Naughty Boy for “winding up” 1D’s legions of fans.

Taking to his Twitter page after NB leaked a demo of Zayn’s solo efforts, Lou wrote: “Wow @NaughtyBoyMusic you’re so inconsiderate pal , seriously how f*cking old are you ?

He then followed up with possibly the most apt thing that he has ever said: “Always have struggled to bite my tongue”.

Ain’t that the truth, but that’s exactly why we love him.

In fact, we love Louis’ inability to bite his tongue so frickin’ much that we have compiled a list of some of the sassiest things that he has ever said.

Because if anything is going to cheer up the fandom during its darkest days, it’s Louis calling people out for being bloomin’ ‘orrible.

1. Louis Tomlinson VS The Wanted

We’re not going to lie, this was one of the best Twitter spats that we have ever seen and it went on for so long that we actually ended up settling down with a big bowl of popcorn as we watched our timeline erupt in boyband beef.

It all started when Tom Parker from The Wanted tweeted our fave sasspot about him mentioning their band at 1D gigs, asking outright if Lou wishes he was a member of Tom’s now-broken-up band rather than his own.

It went on for ages, it all got rather ugly, and a whole load of people joined in – including Nathan Sykes, Liam Payne, and even a few fans who Lou retweeted, but our fave comeback of ALL of them (and there were a lot) was this gem:

“Why don’t we make your next single our movie soundtrack?”

Ooft, do you want some ice for that burn, Tom?

Lou Lou wasn’t exactly impressed when some over-sensitive parents complained about 1D’s song ‘Live While We’re Young’ being played at their children’s school showcase because the lyrics are appaz riddled with sexual innuendos.

Mary and Michael Stone were mostly distressed by the chorus of the song: “I know we’ve only met but let’s pretend it’s love/ And never, never, never stop for anyone/ Tonight let’s get some and live while we’re young.”

In fact, they were so angered by the concept of ‘getting some’ that they withdrew their two children from the show.

Louis’ response to it all? Sassy tweets of course!

Taking to his social media account, the star wrote a short open letter to the Stones, reading: “Dear Mr. and Mrs. Stone, I’m deeply saddened by your complaint to Chelsea High School regarding our lyrics…

“…I hope you two ‘get some’ very soon

That’s GOT to hurt.

Louis teamed up with his bandmate Niall Horan when musician Jake Bugg dubbed 1D “terrible”, among other things, in a moany rant to Shortlist magazine.

However, whilst Niall went for the relatively sweet tweet: “Really buggs me that artists we’re fans of ,flip on us in the press !”, Lou went in for the kill, quipping: “Hi @JakeBugg do you think slagging off boy bands makes you more indie ?”

Surprisingly, Jake didn’t have much to say to that…

4. Louis Tomlinson VS The Mirror

Another day, another slay. This time, Lou took on an entire media corporation when they posted a story that slagged off his eternally lovely mother, Johannah.

Needless to say, family man Louis was quick to jump to his mum’s defence and tweeted: “I am appalled by what The Mirror has done to my family. It’s disgusting and immoral. 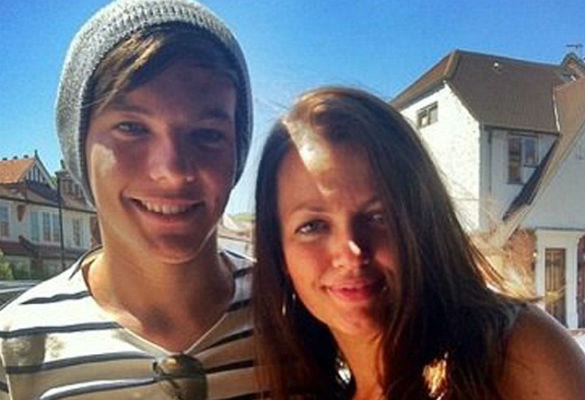 #F*ckYouTheMirror As long as I am in One Direction we won’t be working with The Mirror.”

And would you believe it, they’ve not worked with the newspaper since.

It’s safe to say that 95% of the One Direction fandom were left unimpressed when Harry Styles and Taylor Swift embarked on that awkward, short-lived relationship back in the winter of 2012, but nobody more so than Louis William Tomlinson.

Seemingly physically unable to refrain from rolling his eyes at the mere mention of TayTay’s name, the best thing about Haylor was definitely Lou’s sassy comments, which were made at any given opportunity.

When a reporter asked him if he was happy for Taylor and Harry’s relationship, the 23-year-old replied: “I’m happy that they’re good friends.”

Before adding one final jibe: “If that”.

PREACH IT, BABE, PREACH IT.

We also can never forget the way he defiantly held down his arms and refused to clap for Taylor after she massively slagged off his Harry at the MTV VMAs back in 2013.

How’s that for loyalty, eh?

This was one of the least detailed jibes, but still a pretty solid effort nonetheless.

After Radio 1 DJ Nick Grimshaw was REALLY RUDDY OBVIOUS when slagging off a “complainy popstar” on his breakfast show, an irked Louis tweeted the simple but effective: “@grimmers < @chrisdjmoyles”

7. Louis Tomlinson VS The Voice

If there is one thing that Louis will always do it is defend his own, which extends to his family, his fans, and, of course, The X Factor.

Not one to forget his roots, the Doncaster lad was quick to leap to the defence of the TV show that made him famous earlier this year when The Voice UK judges began their annual interviews where they explained exactly why their show is better than X Factor.

Well, Louis was thoroughly unimpressed with their comments and promptly took to social media to tell the world about it, ranting: “Is bad mouthing The X Factor the only way The Voice knows how to promo their show ? #everyyear”

Our fave thing about Louis is how he never subtweets, he never tweets and deletes, and he is no stranger to the @ button on Twitter, which is why it is just so, SO brilliant when he does call somebody out.

Last year we got a total gem when the star exposed a random guy called Ross Buckley who had been slagging Lou and 1D off big time on Twitter, Louis showed his millions of followers exactly what he was like in private when he shared a a screenshot of a DM he’d received amid the public hate:

9. Louis Tomlinson VS One Direction

Let’s get one thing straight, just because he is bezzie mates with his 1D bros it doesn’t mean that they are exempt from his sassy ways, in fact, they tend to bear the bloomin’ brunt of it!

Although it’s important to point out that when he teases his bandmates with his sarcastic comebacks he doesn’t mean any harm because he loves them all so very much and we reckon that his perfection in the art of slaying is just one of the many reasons why they love him too.

[ 24 Facts You Might Not Have Known About Louis Tomlinson ]

[ 24 Facts You Might Not Have Known About Harry Styles ]