Catapulted popstar Madonna has admitted that she’d let her children try drugs ‘in moderation’ in scenes due to be broadcast on ITV1 later this month.

Well it wouldn’t be unlike good old Madge to set Middle England into a spate of hysteria, would it now?

Speaking on The Jonathan Ross Show, Madonna surprised literally no-one when she said that she’d dabbled in various types of drugs in her youth, and she wouldn’t feel comfortable telling her kids not to experiment because of that.

Is this what she meant about being an #unapologeticb**** all this time?

One of her new songs, ‘Devil Pray’ contains the lyrics ‘we can get high, we can get stoned, we can do Es, we can do acid’ – which led Wossy to wonder how many of them she’d done.

But don’t get your cape in a twist people – it doesn’t sound like Madge is going to be booked into the Betty Ford Clinic anytime soon.

The matador impersonator said:  “I am not a big fan of drugs. They just don’t suit me.”

“The handful of times I have tried drugs, many many many many years ago, I just didn’t enjoy it. I wanted it out of me. I started guzzling bottles of water thinking that was going to end it.”

It was then that Jonathan asked about how she handles it with her kids (you know, because they’re at that ‘difficult age’). 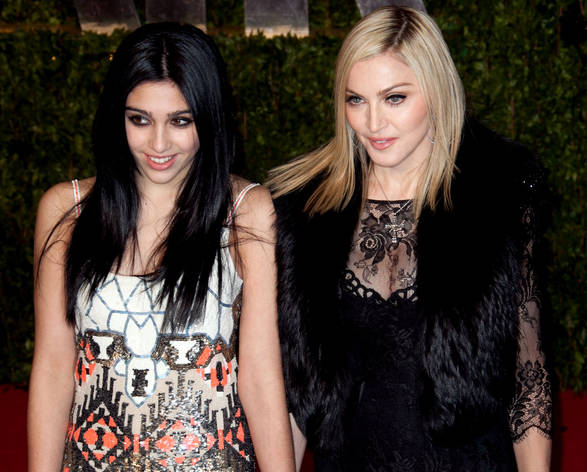 Referencing her daughter Lourdes, Madonna said: “I just ask my daughter to make wise decisions and to do things in moderation and to try not to mix her alcohol.”

Now we can quite clearly imagine those who adhere to the Daily Mail school of parenting erupting into an apoplectic fury at this statement – but to be honest, we think she sounds pretty sensible, right?

And to be honest, if your mum’s Madonna, you’ve probably got your shizz together anyway.

And if you STILL haven’t seen the moment Madge made us laugh, gasp and rewind our TV at least five times, you really should.

The 56-year-old has already explained that she fell because her cape was tied too tight, but now she’s gone into even more detail about THAT night.

“I was thrown a wrench at the beginning of the performance. I was told to tie my cape and start much further back and I had to walk further and everyone was worried my cape was slide off so they tied it really tight around my neck.”

“So here I am marching in like the queen, I got to the top of the stairs and I pulled the silky string and it wouldn’t come undone.

“My two lovely Japanese dancers they basically strangled me off the stage. I had two choices, I could either be strangled or fall, and I chose to fall.”

Of course you did sweetheart. OF COURSE YOU DID.

The Jonathan Ross Show is on tonight (with Yeezy – hurrah!), but you can catch the Madonna special on the 14th March.