Poor Michael McIntyre has found himself in the centre of another family-orientated scandal.

The comedian has been accused of ‘cutting all ties’ with his family after his stepmother publicly revealed that his father had committed suicide, and she’d let Michael believe that he had actually died of a heart attack for seventeen years.

Now Michael’s stepbrother, Billy McIntyre, has told The Sun newspaper that a rift has widened across the entire family following this heartbreaking revelation.

US-based Billy said: “After I found out about it, I went to England to visit Michael and we went out to dinner. I thought we were going to talk about our father’s death, but it was just brought up at the end of the conversation – it was the elephant in the room.

“There was a great amount of anger and spite coming from him which I found surprising. He seemed angry about my dad.”

The 28-year-old then goes on to defend his mother’s decision to broadcast the news, saying: “There has been a lot of pain and neglect since this news came out.

“I feel like my mum fell on a grenade for everybody and sacrificed herself because of the emotional baggage and misery that she had to live with.

“But for whatever reason she got ostracised by Michael and it hurt her. My little sister is going through hell. She and Michael had a turbulent relationship and there has been barely any contact.

“What bothers me most is seeing first hand the damage it has done to my mum and sister – of not having that person to talk to. I don’t know if it’s the fame, I think he’s just cutting the problem off.”

Billy added: “I went to the UK to see Michael’s show and have always respected his talent. It would have been nice for him to show mutual respect.

“Michael commands the room – to his credit, he is a personality. But it’s all about Michael.”

Michael has responded to his brother’s claims with a statement, which reads: “I’m saddened that my brother continues to run these false claims via the media for financial gain about what should be private.

“My brother knows the truth.”

Two weeks ago, 38-year-old Michael was left devastated when he discovered the truth about his father’s death.

His stepmother, Holly, spoke out about how she was forced to tell him that his father hadn’t died of a heart attack 17 years previously, but in fact had committed suicide.

The 38-year-old had previously recounted in his 2010 autobiography the  ‘sudden nature’ of his father Cameron’s heart attack when Michael was just 17-years-old.

Unbeknownst to Michael, Cameron, a comedian who previously worked with Kenny Everett, had shot himself in his Hollywood apartment in 1993.

Holly decided not to tell Michael or his sister Lucy the truth until hit BBC show ‘Who Do You Think You Are?’ approached the comedian to delve into his family history. 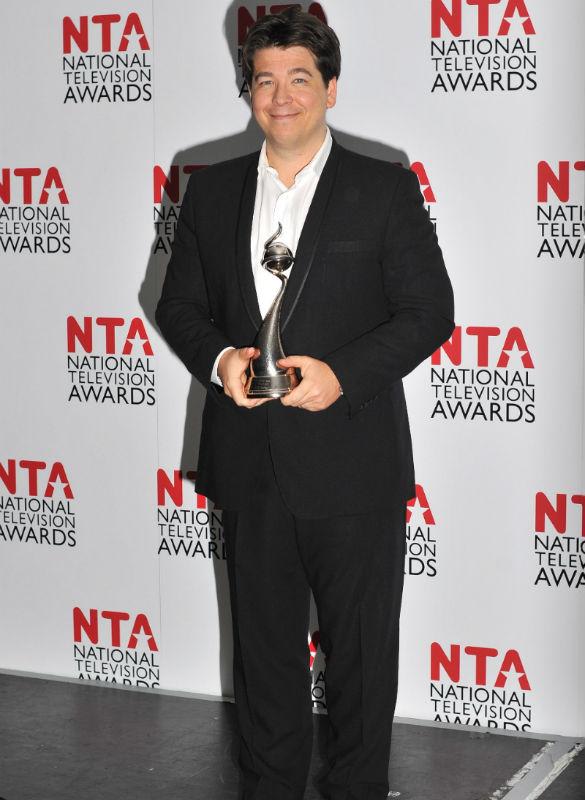 Speaking to The Mail On Sunday, Holly relived the painful moment she finally came clean about Cameron’s death.

She said: “That was the hardest phone call of my life. I was shaking when I told him. For years I kept this terrible secret and finally I was sharing it.

“I said, ‘Michael, your father didn’t have a heart attack. He killed himself.’

“There was a paralysed silence on the other end of the line. He was crushed. How are you supposed to react to news like that?

Holly explained that she kept to the truth away from Michael and his sister in an attempt to protect them from the ‘burden of growing up under the shadow of a parent committing suicide’.

She continued: “Michael grew up believing his dad went out for his morning walk and suffered a heart attack at the side of the road.

“I didn’t think the children needed the burden of growing up under the shadow of a parent committing suicide. If Michael hadn’t become famous the truth would never have come out because I wouldn’t have told anyone.

“But he emailed me and said he would be doing this show and could I help the BBC with information about his daddy.

“I knew the researchers would find the death certificate because it is a matter of public record. I had to come clean.”

Speaking of her decision to speak publicly about her revelations, Holly said: “I am telling the truth and it is my story to tell. I have lived with the guilt, the secrets, for so long. I want the truth out there. It’s been a toxic element in my life, in all our lives.”

For confidential support call the Samaritans in the UK on 08457 90 90 90, visit a local Samaritans branch or go to www.samaritans.org.