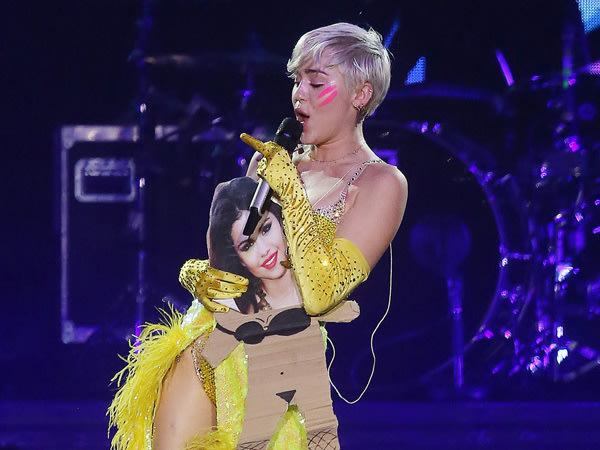 Miley Cyrus showed her distaste for all things Selena Gomez last night after she presented a cardboard cutout of the star, chucked it into the crowd at a gig and shouted ‘F*** YOU’ at it.

Well, perhaps it seemed like a cathartic thing to do at the time?

Miley serenaded the cardboard cutout at one of her gig’s, singing her song ‘FU’ to it before it went into the audience.

It seems that the stunt wasn’t thought out beforehand as TMZ’s footage shows Miley pluck the Selena cutout from the crowd shortly beforehand.

However, going back to the alleged hatred – to think these two used to be best pals…

Yep, back in 2011 the two then-Disney starlets were all kinds of close. Just check out this well chummy photographic evidence:

So, just what the heck went wrong?

Well, things took a turn for the worse when Miley recorded a YouTube video which seemed to make fun of Selena, although she did apologise at the time.

However, more recently it was suggested that Miley had been getting close to none other than Justin Bieber – Selena’s kind-of famous ex-boyfriend – which also is reportedly behind the animosity.