Emina Dedic could relate to the community’s struggle. The 25-year-old Muslim woman came to America more than two decades ago after her family escaped a concentration camp during the Bosnian genocide. While she remembers what it was like to struggle during her family’s resettlement in the U.S., the idea that a Muslim community was asking for government accommodation didn’t sit well with her.

“I’m about to put a smack down on my brothers and sisters,” Dedic wrote in her Facebook post on Oct 20. “Why on earth [do] they think it is okay to look into the eyes of the already generous US taxpayer and say your charity is not good enough for me. I demand special treatment.”

A political activist who holds conservative beliefs, Dedic added, “If you truly have trouble getting Halal foods, ask your mosque. Ask the Islamic community.” 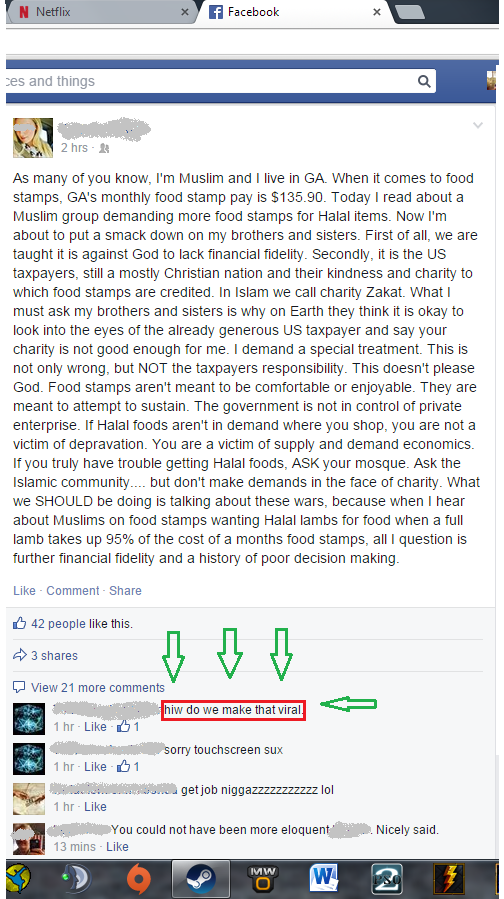 The status was screen captured by one of Dedic’s friends and posted to the image-sharing site Imgur. Since then, it has received more than 9,000 upvotes or likes. Social media users have responded to Dedic’s comments positively. For the most part, they run in politically conservative circles.

“As a Muslim, I don’t understand that sense of entitlement these idiots carry over to the rest of the world!! They ruin it for all of us!” user “puyol5″ wrote.

It seems like this woman’s #Muslim group is short on gratitude, not food. Their demands will cost taxpayers $150,000 http://t.co/IxbHfTb70J

This Muslim woman makes perfectly good sense. Any Christian who condemns all Muslims as though they are all… http://t.co/lLY6ZDgwjT

For Dedic, the news hit home. When Dedic’s family arrived in Atlanta, her father worked two jobs within walking distance from their home because he didn’t own a car. Her mother worked at McDonald’s. Her family learned English through the “Hooked on Phonics” kit she received from her preschool. While they were never on food stamps, Dedic says she was enrolled in the reduced-price lunch program at her school and her family made choices around their halal diet. “When we couldn’t afford halal foods, we simply wouldn’t buy lamb or would eat what we could with the budget we had,” she told International business Times.

Halal, the Arabic word for permissible, refers to food products that follow Islamic dietary laws. Like kosher food in the Jewish tradition, the dietary laws address three issues: animals like cattle and finned fish are allowed while pork and shellfish are not; blood must be removed from the meat before it is eaten; dairy and meat products can’t be mixed. In halal products, food shouldn’t be contaminated with pork, alcohol or animals that haven’t been slaughtered according to Islamic law.

In Minnesota, the Somali women’s advocacy group Isuroon argues there’s not enough halal food at food banks in Minneapolis. Minnesota has a large Somali population — an estimated 77,000 or more. Most arrived as refugees and have been resettled by local agencies such as Lutheran Social Services, Catholic Charities and world Relief.

“Some food shelves are trying to meet the need, but some of them already got canned beans that have already been mixed with pork — and there is a literacy issue here,” Fartun Weli, executive director of Isuroon, told CBS Minnesota. On Sept. 15, her group led a rally demanding that county budget funds be reallocated to create halal food shelves at local food pantries. To get the project up and running would cost $150,000. Peter McLaughlin, Hennepin County commissioner, said the group can share their proposal at its budget meeting on Nov. 13.

“The ‘viral’ writer is somewhat misinformed in that our community is not asking for additional food stamps from the county, nor are we asking for additional funding/taxes from the state or county,” Weli wrote in an email to IBTimes about Dedic’s Facebook post. She says the Somali community in Minnesota contributes $223 million to the state’s economy. A 2006 study found Somalis in Minnesota account for $164 million in buying power and own 600 businesses. “We aren’t asking for handouts,” Weli said. “Most Somalis work hard so we asked some of our tax money to come back to our community so we can take care of our own while we keep continuing to do better.”