It might have been a week since Louis Tomlinson publicly slayed Naughty Boy on Twitter after the music producer antagonised fans by sharing a ‘Zaughty’ (lol) YouTube video, but that hasn’t stopped good ol’ NB dragging the dramz out in a brand spankin’ new interview.

Surprisingly, the 30-year-old dares to blame Lou for their very public spat, claiming that the One Direction star was the one to “provoke” the fans.

Errr, did we miss something because we thought that this whole thing started when Naughty Boy posted a weird vid of himself and Zayn Malik AND leaked Zayn’s secret solo material less than a week after the Bradford boi left One Direction?

Speaking to Heat magazine NB, whose real name is Shahid Khan, moaned: “There seems to be some needless provoking going on. [Louis] was deliberately adding to the provoking.

“I don’t think that’s fair. Especially on Zayn, that’s not fair. Right now, there needs to be calm.

“He could have said that to me privately.

“Doing it openly is another act of provocation that’s not needed.”

So what Shahid appears to be saying is that it’s alright for him to publicly antagonise One Direction fans with his ‘Zaughty’ videos and solo material, but it’s NOT okay for Louis to publicly defend the fans – that is something that should be done in private.

The musician then went on to prove just how much of a buddy is to his good pal Zayn, sharing: “I’ve been his friend. He needs one. Just because we were seen at my studio – you [don't] necessarily just make music.

“People seem to forget that he’s under so much stress. Which is why he left the tour. There’s a lot going on. People get caught up – what he has done is to be normal.

“Sometimes being normal is to try and sort things out with your fiancée or hang around with a friend. That is normal.” 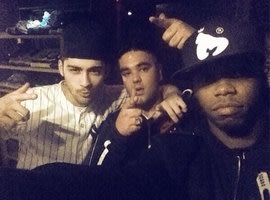 And do you know what, we have to agree; some normality sounds like exactly what Zayn Malik needs right now, and perhaps Naughty Boy could start helping him with that by keeping schtum about him, his former bandmates, and his fans for a little while, eh?

We have to admit, that sounds like a bloomin’ FAB idea to us.