We hope you’re sitting comfortably for this one.

Nick Cannon has gone on the biggest Twitter rant in the history of Twitter rants, blasting the rumours that surround his and Mariah Carey’s divorce.

It was the ever-reliable sources at TMZ who got the rumour mill started when they claimed that it was Nick who wanted out of the marriage because Mariah is “toxic” and he was worried for her emotional state.

They even went so far as to say that he was concerned about the couple’s children, three-year-old twins Moroccan and Monroe, as they showed signs of emotional upset from living with Mariah.

Well, if all of that is utter rubbish then we can totally see why Nick finally had enough and took to social media to blow it all out of the water.

Right, are you ready? Have you had a loo check and maybe got some snacks on standby?

Because this is a long one.

Nick wrote: “I have personally been absent from social media for the past few months for obvious reasons but I feel the need to finally speak up… During this challenging time for me and my family it saddens me that the media can be such evil bottom feeders!

“Because my family & I haven’t been forthcoming with personal information, people are quick to paint negative pictures and spread rumours, for the record I NEVER have, nor will I make a statement regarding my marriage.

For the record I NEVER have, nor will I make a statement regarding my marriage.

“So whatever your favorite gossip outlet is reporting has been created within their own imagination… At this difficult time I would ask all civilized people to please respect my family and this process.

“What infuriates me most is to hear people slander @MariahCarey . I will forever be in debted to her for blessing me with our children…I will always love her unconditionally for this and so much more. @MariahCarey is an amazing Mother and I trust her wholeheartedly.

“So to see false reports in the media stating otherwise is absurd! While I would like to remain silent I can no longer allow this to happen. I love @MariahCarey and that will never change!!!

I love @MariahCarey and that will never change!!!

“If the media wants to portray me as the Bad guy that’s fine… But it is unfair to drag innocent people into the equation. Others have lives, families, and careers and for the media to slander them is down right evil and illegal…I apologize to anyone who’s gotten caught up in this unwarranted drama.

“BTW Shouts out to the so called “Sources”!I hope the check was worth it… @”

I hope the check was worth it… @

What troubles us with that final line is the lone @ at the end of the tweet – WHO WAS HE GOING TO @?? DOES HE KNOW WHO THE SOURCES ARE??

Nick finally signed off with some food for thought, a critique of famous phrases, and what appears to be a vow to not comment on the matter again:

“And finally, “Trouble in Paradise” is the dumbest phrase I’ve ever heard! I would never say that sh!t

Now back to your regularly scheduled programming… #radiosilence”

Well, after all of that what could there possibly be left for him to say anyway? 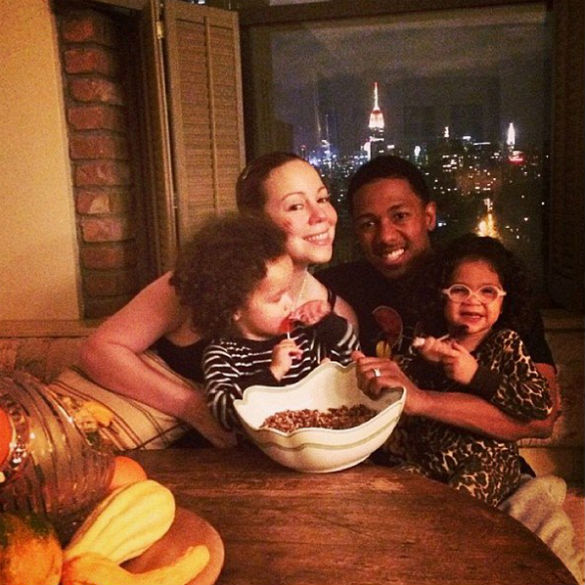 Despite being tagged with the old @ symbol, which we thought was a nice touch, Mariah Carey is yet to respond or have any comment over on her Twitter page, but we will definitely keep our eyes peeled on that one.

Anyways, it looks like these sources and insiders have been well and truly called out by Nick but we have to say it would just be a whole lot easier if they just TOLD US why they were splitting.

It’s clearly not because she is a bad mother, or seemingly for any other reason that has been reported in the past – he even said that he will always love Mariah… Are they positively sure that they can’t work things out?

We just really don’t want them to split

[ Apparently THIS WAS A LIE ]

[ 5 Signs There Really Was Trouble In Paradise, Sorry Nick ]