Basically, One Direction fans are feeling a little bit peeved that their fave boys’ latest album, ‘Four’, which was amazing, written by the band, and an all-round winner, has been a tiny bit overlooked in terms of singles and stuff.

We mean, the record was released in November last year and has only had two songs released to the public -  Steal My Girl and Night Changes.

As a result, fans have decided to take matters into their own hands by creating a Do It Yourself single to showcase their undying love and support for the boys, as well as highlight just how powerful they are as a legion of dedicated followers.

And the lucky song in question is no coincidence either, with it being decided that ‘No Control’, which was written by Louis Tomlinson AND vocally lead by him (yeah, remember those vocals that a certain someone dared to slam?) should be the one to get ‘all the love, as Harry Styles would say.

London-based Anna is the one who first came up with the idea and she had it all figured out, writing on her Tumblr page: “Since this fandom is a black hole nowadays with no light at the end of the tunnel, I want to make a wish.

“I would like this fandom to gather together for a project, the project is releasing No control as the first One Direction DYI single.

“We all agree that No Control should have been a single from Four, we all love the song and we all wanted to hear it on the radio, blasting it, see the recognition this song should have had.

“It doesn’t matter there were other songs worthy to be a single in the album, this is something the fandom loves and that has always generated a big enthusiasm. 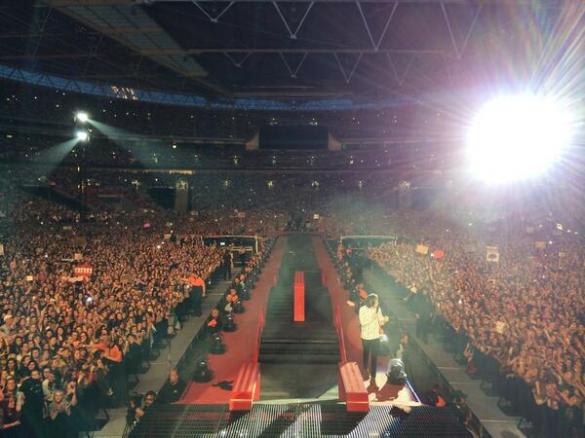 “So, since we are not going to get it as a single, we should release it ourselves. We should decide a date as the release, promoting it through twitter and tumblr and facebook. This fandom is born and raised throughout these platforms, promoting the band just like when they were kids at The XFactor shouldn’t be hard at all.

“People in this fandom who are extremely skilled at photoshop, should submit their covers for the single and the fandom itself should vote the best one to make it “the official one”.

“The talents who work with movie maker and imovie should think of an OT4 video clip to promote the album. Or even small mini clips to promote it before the release of the “official music video”.

“The amazing people who draw might even make a comic version of the song to be downloaded with the single.

“On that set date, we should all buy the track from Itunes, make it number 1 on the chart just like any normal single. We should make No Control release day Trending Topic on Twitter. We should send the boys our comments and appreciation for the song.

“We can even compliment Louis on the vocals how much we want because nice messages are always nice and we all love Louis deep and hard and we want him to know it all the time. We also love the rest of the boys deep and hard and it’s always nice to celebrate the OT4 with a new single. Even if it’s a “fake release”, that’d be good.

“All to show how powerful this fandom is and how good there still is in this fandom and also, how music can gather the world together – which is always the most important part of all this and the point of everything.”

Lovely stuff, we think that you will all agree.

Unfortunately, after getting thousands of her fellow fans onboard, Anna ran into that old troublesome chestnut of copyright, and took to her blog again to call the whole thing off for legal reasons and such.

Still, you can’t put such a brill idea out there and not expect everybody to run with it, and since then it has been decided that this Sunday, 17th May, will become known as ‘No Control Days’, with followers being urged to “request/ buy/ promote the song ” and, in doing so, make Louis Tomlinson’s entire day.

Well, anything that puts a smile on Louis’ face AND involves dancing around to a bloomin’ fantastic tune is good enough for us  – here’s hoping it all goes to plan, yes?

Never underestimate the power of the 1D fandom.

[ Harry Styles To Take Over As Lead Frog In Children's Book ]