The 25-year-old wed fellow swimmer, Harry Needs, at The Ashes, in Staffordshire and has shared how happy she is now that she has married the love of her life.

Rebecca spoke to Hello! magazine about her big day, saying: “The ceremony was so personal, which was exactly what we wanted. I love the fact Harry was in bits before I even reached him.

“I was a bit nervous in the car on the way here with my dad, but as soon as I walked in my nerves melted and I relaxed.

“The room was just so full of love.”

Rebecca was proud to show off her new slim figure in a gorgeous Stewart Parvin dress, but thankfully revealed that she had her priorities straight and was happy for all the right reasons.

“I don’t like it when people assume you’re really happy because you’re thin,” she said, “I’m not suddenly confident because I have lost weight, I’m happy because I’m marrying the love of my life.” 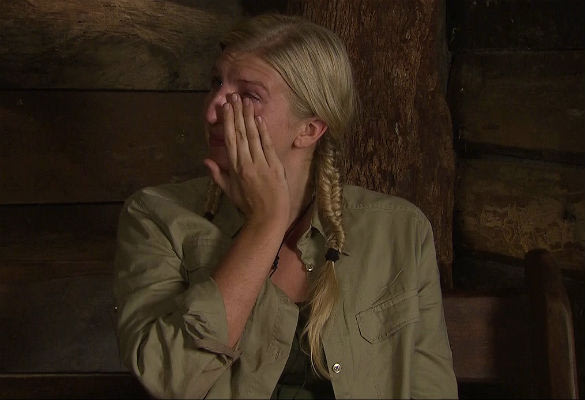 The swimmer famously showed insecurities about her body when she took part in the ITV show I’m A Celebrity… Get Me Out Of Here and she was often shown in tears after comparing herself to tiny glamour model Amy Willerton.

Rebecca admitted that it was her I’m A Celeb journey that kickstarted her into action, sharing: “I lost nearly two stone in the jungle and perhaps another four of five pounds since then, I feel better for it.”

In the lead up to her big day the now Mrs. Needs also followed a Harley Street clinic’s weight loss programme and even spent a week at the clinic’s French retreat, which comes with the hefty price tag of £3,295 per person.

After paying so much money for the pleasure of attending the retreat, she embarked on a very strict plan of vegetable juices and long walks in the countryside, with her retired swimmer friend Katherine Wyld.

The athlete is also rumoured to have had a nose job earlier in the year, after speaking out about how vile Twitter abuse made her feel even more insecure about her appearance.

However, Rebecca doesn’t need to be doing any of this to impress her new husband, with Harry telling Hello!: “I compliment her every single day, because to me she is the most beautiful woman in the world.”

[ Rebecca Adlington has nose job after years of mean comments ]

[ Rebecca Excused From Bushtucker Trials Due To Serious Medical Condition ]