Well this little treat has given our weekend a little lift. Childbirth vlogger extraordinaire and part-time singer, Robbie Williams, has ‘revealed’ that he’s dropping a SURPRISE album on Monday morning.

OK, so now he’s told us about it it’s not really much of a surprise anymore, but – and this is a big but – JUST LOOK AT THE ALBUM COVER.

The record is called ‘Under The Radar: Volume 1′ (which, when putting our thinking caps on, makes us believe that there’ll probably be another one in a while), and is basically a collection of songs that that he’s had hanging around on his computer that didn’t make the last album.

Robbie said of the new album: “It’s a bunch of tunes that I’m very proud of, love to bits and want you to hear –otherwise they’re just going to remain on my computer.”

So, er, is this basically a smorgasbord of musical offcuts from the deli counter at Morrisons then?

Well, even if it is, it’s all very exciting – especially for all the crazed Robbo fans that the ‘Candy’ crooner himself refers to as ‘friendlies and mentals’ – indeed it’s this bunch of loons that the album’s been dedicated to.

And whilst the ‘friendlies and mentals’ will no doubt be apoplectic with hysteria at Robbo’s ‘doing a Beyoncé’, not everyone’s so happy about it. Guy Chambers (the bloke who wrote ‘Angels’ and all that other ‘classic’ Robbie stuff) thinks he’s c-c-c-crazy. 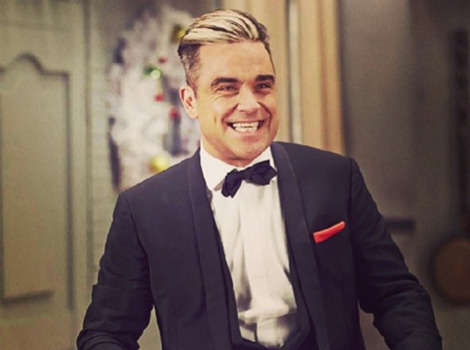 Speaking on YouTube, Rob said that: “[Guy] thinks I’m a lunatic for not putting them on an album that we’ve promoted with TV performances and at radio stations and a big tour. But… I want them out now.”

Always so impulsive, that Robbie.

However, Take That fans will face a bit of a conundrum on Monday – as it’s also the day that the band release their first new album without Jason Orange – imaginatively entitled ‘III’.

DECISIONS, DECISIONS. (Or maybe you can just buy both, but whatever).