It’s no secret that Judy Murray‘s sons haven’t EXACTLY been complimentary about her performances on this year’s Strictly Come Dancing – especially after Andy Murray admitted he could watch them to fall asleep!

Bit harsh! Luckily, Andy’s brother Jamie is on hand to give his mum a touch more support, as Judy has admitted he’s become her new coach. 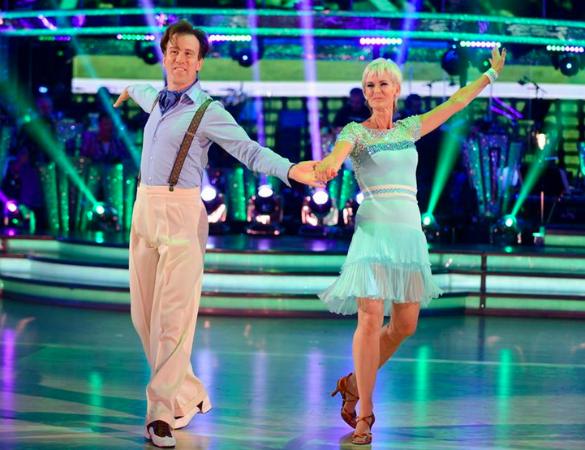 Speaking on Good Morning Britain, Judy was all smiles as she revealed all about her new dance coach – and we reckon Anton Du Beke might want to watch out!

She told the show: “He’s been telling me what I should be drinking, eating [and that] I should be watching clips on YouTube to get myself better.

“He’s kind of turned into my coach and it’s really quite funny!”

Talk about a role reversal.

Jamie was in the Strictly audience last week, and Judy’s hoping Andy will be able to join her this weekend – but it all depends on his tennis tournament.

She admitted: “There’s a part of me that hopes he’ll still be in paris [playing tennis this weekend], But there’s another part of me that would love him to be there [watching me dance].”

“That’s payback right there… now you know what it feels like, son!”

Would you like some ice for that burn Andy?

Although her boys were initially “a little bit mortified” that their mum was even THINKING about popping on some ballroom shoes and attempting to strut around the dancefloor, it sounds like they’re coming round to the idea now.

She revealed: “They’ve never seen me dance before. Ever. I think they’ve been quite surprised and they know that I’m enjoying myself and that of course is the main thing.

“And they like the way that I look – they’ve never seen me in dresses and make-up before, so that’s another thing. The whole thing has been enormous fun!”

Week 5 – The Charleston! Up the creek, or plain sailing? Read all about it on my blog! http://t.co/MZ4z4RwJhu pic.twitter.com/teVsu6cSbX

Er, yeah. We reckon that must’ve been quite the shocker!

Despite the brutal battering she often gets from the judges, naming no names *cough* CRAIG REVEL HORWOOD *cough*, Judy confessed she’s having the time of her life and takes the criticism in her stride.

She said: “They have been quite rude but I just remind myself I’m doing it for fun. I just laugh at it. When you’ve watched the show for as long as me, you kind of know the sort of things they’re going to say to those of us who are not particularly well co-ordinated.

She added: “It’s one of my favourite TV shows and I still have to pinch myself that I’ve got the chance to be part of it.

“I actually hoped that I would be a bit better than I am because of my sporty background, ’cause I’m used to being active but it’s a completely different thing.

“When you play tennis, you react to the ball and you move instinctively. In the dance, you’re doing a set rountine and then you have to put it into the music.”

Fair play, Judy. Don’t worry though – she won’t be freestyling and moving instinctively on the dancefloor any time soon.

Just make sure you do what your new coach says!