Well, she is a total hottie.

That Strictly curse is so real that it has been blamed for breaking down no less than FIFTEEN relationships over the show’s ten-year run.

But BBC bosses are desperately trying to quash the show’s habit of professional dancers copping off with their celebrity partners by actually BANNING their sexiest dancer, Kristina Rihanoff, from dancing with men in a relationship.

Stunning Kristina has earned her nickname ‘Siberian Siren’ after reportedly being involved in breaking up several of her dance partners’ relationships over the years, so bosses have reacted by pairing her with single man Simon Webbe for the latest series of the show.

A source told The Sunday People: “There were discussions about Kristina, and she was made aware of them herself. There is no blame being attached to anyone.

“Most of the relationships that have broken down after contestants appeared on Strictly Come Dancing clearly had problems before the show began.

“But there is no doubting the fact that Kristina is a very attractive woman who has been at the centre of relationship breakdowns.”

And ain’t that the truth.

As well as being linked to her partner from last year’s series, Ben Cohen, who immediately split from his wife after being pictured with the dancer, she is said to have been instrumental in the break up of Joe Calzaghe’s relationship, as well as Vincent Simone’s.

It is widely believed that the curse that surrounds the BBC dancing show is a result of the pairs getting hot and heavy during intense rehearsal sessions, and when the dancers are as attractive as they are it must become pretty impossible to resist. 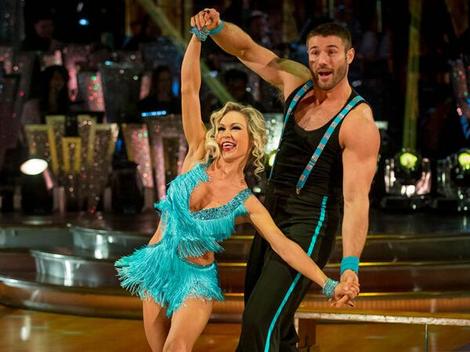 Rugby player Ben Cohen described a rather awkward moment during last year’s show when his wife walked in on a pretty raunchy dress rehearsal with Kristina.

He said: “Partners have to be very understanding. I had a moment in training when Abby walked in.”

“I was doing this [gyrating] to the back end of Kristina. It was a bit awkward and my wife said: ‘I think I’ll come back in a minute’.

“It can be a bit challenging sometimes but she is a good girl and understands the spirit of the show.”

Maybe not *quite* as understanding as you originally thought, eh Ben?

Now with the Siberian Siren focusing all of her energy on single boy Simon for this series, hopefully the curse will be broken and married men can roam freely on Strictly Come Dancing without the fear of a marriage breakdown.

We wonder if the same can be said for the female contestants too?

Only time will tell!