Just when we thought Taylor Swift couldn’t become any better of a person, she goes and does THIS.

And it’s not gifting us with another incredible cornrows photo, sadly.

Nope, Taylor practically became the genie in the lamp as she made a young fan’s dreams come true when she photobombed their park-based photoshoot whilst on a good ol’ jog.

Giving us the ultimate motivation to get our jogging gear on (not that we even own that stuff), the 24-year-old decided to give two young fans the surprise of their life as she stopped mid-jog for a little chinwag.

Oh, and to get in on their photography session, AS YOU DO.

Joining in with the girls’ session with Sarah Bailey photography, TayTay decided to up the anti from merely standing and smiling to actually improvising her own poses with the girls.

She really is the best popstar ever isn’t she?

Writing on her Twitter, the photographer herself described how nice T-Swiz was (duh), saying: “she was! Offered to take pics and proceeded in directing poses- she was so nice!”

@SwiftBeSlaying she did and walked right through my photo shoot she said to the girl ‘you want your picture with me?’Then posed for pics!

Of course, it’s no big secret that Tay is super close to her fans and will pretty much do ANYTHING to make them feel like they’re her BFFs.

We already feel like we’re her sister from another mister, so we guess it’s working.

Speaking to The Sunday Times, Tay has recently revealed that connecting with fans is like an addiction to her, in a good way obvs. 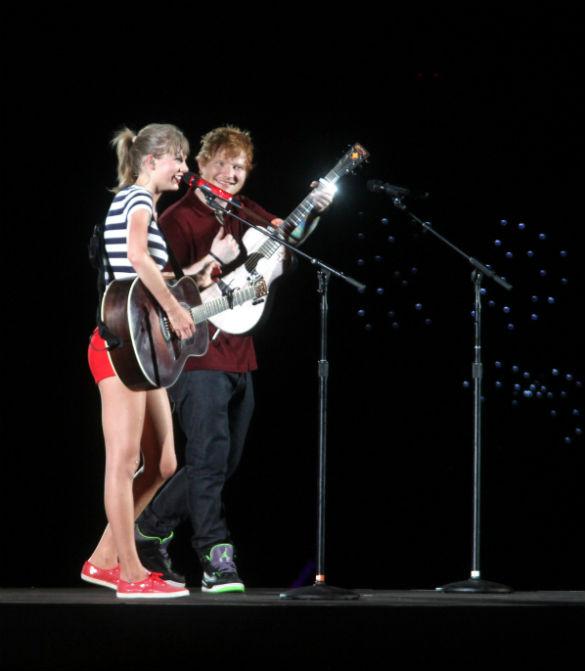 She explained: ”The addiction we [her and Ed Sheeran] have is that connection.

“You write a song about an emotion that confuses you, or about something you’re scared of or excited about, and you release it, and all of a sudden you’re making a connection with millions of people.

”Then the final phase is that you look out into a crowd of thousands of people and they know every word. That’s an overwhelming feeling of camaraderie – which we’ve never felt before in our lives.”

Taylor Swift – Coming to a park near you SOON.

[Taylor Swift Is 'Addicted' To Connecting With Fans]