Is it over already?

She’s used to all sorts of drama as EastEnders’ character Lauren Branning but apparently reality isn’t much better for poor Jacqueline Jossa.

Just two weeks after announcing that she and TOWIE’s Dan Osborne are “thrilled” to be expecting their first baby together, sources reveal that there is trouble in paradise.

The pair haven’t been spotted together since 18th July and it is thought that Jacqueline isn’t too pleased with photos that emerged of Dan surrounded by bikini-clad babes in Marbella, OR his close relationship with Megan, his ex girlfriend and mother of his first child, eight-month-old Teddy.

A mysterious source (we reckon Phil Mitchell) told Heat magazine this week: “They’ve not really spoken since that trip (Marbella). They were both shocked when Jacqueline found out that she was pregnant – Dan’s got a great relationship with his ex and I think he’s always held a bit of a torch for her.

“He goes round hers all the time to see Teddy.” 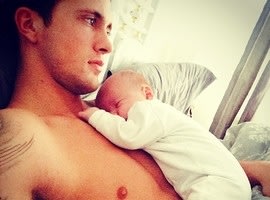 Dan, 23, has also opened up to Star magazine about the tricky nature of balancing Jacqueline and his ex, saying: “It’s a really difficult situation. It’s not easy for Megan.

“I’m obviously in the middle but I’m trying to do the best I can for her, Jacqueline, and of course Teddy.

“We are trying to work through it all together.”

Although perhaps his efforts are a tad misguided.

Dan no doubt added extra tension to what sounds like an already strained relationship with 21-year-old Lauren when he posted a picture on MazSight recently that showed him seemingly topless on a bed with Teddy, which would be fine if it wasn’t for the fact that the bed is widely believed to be Megan’s.

Jacqueline has remained tight-lipped about the complications of her and Dan’s relationship, but Megan has been less eager to keep her views to herself.

Following the couple’s baby news Megan took to Twitter to vent, saying: “I can not believe the audacity of some people… Shocking.”

Prior to that a series of tweets suggest that Megan may have been willing to give Dan another chance before he announced that his relationship with Jacqueline was very much back on.

Basically it all just sounds very messy and if this was an episode of EastEnders we know without a shadow of a doubt who would be getting the famous ‘doof doofs’.

[ Jasmin Walia Accuses Dan Osborne Of Sleeping With Everyone ]