If you follow diet trends closely, you could get whiplash. One year fat is the enemy; the next, sugar is poison. Recently, twin brothers, Chris and Alexander "Xand" van Tulleken set out on a month-long radical experiment to put the debate to rest over which is worse.

Chris adopted a super low fat diet, consuming only the two per cent he would need to maintain his health. Xand opted for a high protein diet that ditched all forms of sugar (i.e. carbohydrates), from table sugar to flour to fruit. The brothers both work as physicians so lead similar lifestyles and they stuck to the same Fitness regime. Furthermore, because they share identical DNA, any changes they experienced would be attributable to diet, not genetics. A film crew followed their nutritional journey, and it's airing as a documentary on BBC2 on Wednesday.

[17 lifestyle apps that will transform your life this year]
[The sugar detox: Is it possible?]

Xand was motivated because he was at his highest weight ever-245 pounds. He told the Daily Mail he looked like the "fat version of his twin" and was a living, breathing "cautionary tale." He realized that while he and Chris were both doctors, they really didn't know that much about nutrition and diet. "These topics fall between the cracks at medical school. Yes, we understood biochemistry and food metabolism, and knew a lot about the consequences of being overweight," he said. "But which diets work, why we eat too much and why losing weight is so hard don't sit within any medical speciality." 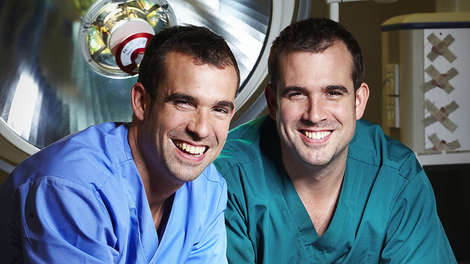 Twins Chris and Xand are using themselves as guinea pigs

More on Yahoo: A Healthy Diet Really Does Cost More

The diets were easy to follow because the rules were so specific. Although there was no limit on how much the twins could eat , Xand says both plans were, ultimately, "miserable." Initially, he thought he had the better deal, devouring piles of meat, eggs, and fat-but eliminating sugars had some nasty side effects. His breath stank and he felt constipated. Moreover, he was sluggish, tired, and his brain was in a fog. When he and Chris raced each other uphill on bikes, he realized that his endurance was shot. Chris flew up the hill while Xand's heart rate surged. "He just keeps getting further away and I cannot make my legs go any faster," Xand huffed to the camera crew.

Xand was the weight loss winner, dropping a total of nine pounds, but he says his high protein, low carb diet caused his body to go into ketosis, which causes it burn fat but doesn't effectively provide the brain with energy it gets from glucose (sugar). Nutrition expert Angela Lemond explained to Yahoo Shine, that high protein diets produce chemicals called ketones, which promote weight loss but can lead to kidney failure.

"We recommend staying above 100 grams of carbohydrates per day to avoid going into ketosis," she said and added, "We know people cannot sustain this way of eating and therefore, they re-gain the weight." Meanwhile, Chris wasn't faring much better. He had lost a little weight, but without the added fat, even supposedly decadent foods such as pasta tasted like cardboard. Lemond says that fat increases the feeling of satisfaction, and indeed, Chris experienced a constant gnawing hunger.

At the end of the month, neither brother felt like his diet was superior. Speaking with scientists working in cutting edge nutrition, they decided that the real problem was the combination of sugar and fat found in many processed foods. "We should not vilify a single nutrient…" Chris told the Sunday Express. "It is too easy to demonize fat or sugar but that enables you to let yourself off the hook in other ways.

The enemy is right in front of us in the shape of processed foods." Speaking with Paul Kenny, of the Scripps Institute they learned how when rats are offered cheesecake, which is about 50 % fat and 50% sugar, they give up other foods and gorge themselves. According to some research, the two nutrients operating in tandem trigger brain's pleasure centers much like cocaine and other drugs and also disable the appetite's off switch. Taking the either the sugar or the fat out of ice cream, for example, would make it far less appetizing.

The brothers concluded that searching for "one toxic ingredient" was fruitless and we should rather be watching calories, portion size, and eating whole foods whenever possible. Its an un-sexy approach that won't spark any diet crazes or launch a bestseller, but could actually work.