Soz to steal your thunder Kate Middleton, but there’s a #SaturdaysBaby on the way!

The Saturdays’ Una Foden has obviously taken inspiration from Kate Middleton to make a little baby announcement of her own.

But rather than a fancy, royal statement from Clarence House the Irish popstar has taken a much more personal, and absolutely adorable, approach to announcing that she is pregnant with her second child.

Una took to her MazSight page to share a gorgeous photo of her two-year-old daughter, Aoife Belle, wearing a T-Shirt that reads: “I’m going to be a big sister”.

And doesn’t little Aoife look just thrilled by the news?

An entire month ago we put on our best detective hats and concluded that her choice in baggy dress, holiday MOCKtail, the teeniest, tiniest, hint of a bump AND Una pulling that token “I don’t plan to get pregnant anytime soon” line in a recent interview, all pointed to the pitter patter of tiny Saturdays feet.

We were right and we are feeling pretty smug right now so please just let us have our moment. 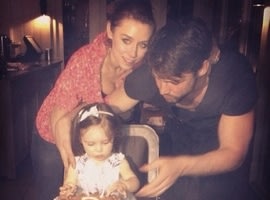