When you think of the Over 25′s category on X Factor, you would be forgiven for only being able to visualize Sam Bailey and Steve Brookstein, tired, middle-aged housewives and washed up pub singers who need more than a makeover to give them the star appeal that the show is all about.

But hang on a minute – when did 25, TWENTY. FIVE. become synonymous with washed up and past it?!

So much so that it has become the way twenty-something’s analyse their age: ‘I only have one year left before I would be in the Over’s at X Factor, oh gawd I must be really old’, etc. etc.

We need to get some perspective here, 25 is halfway to thirty – Not already sitting in a retirement home wearing a floral nightie with your teeth in a jar. 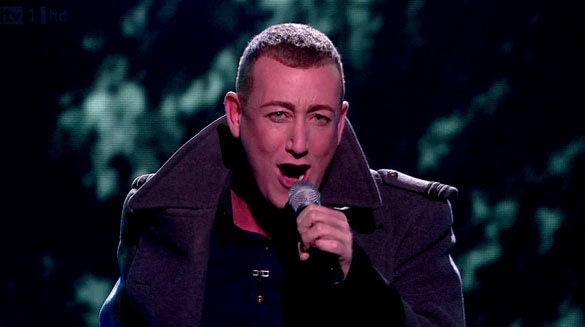 The X Factor Over 25′s category has always been notoriously uncool, but we are here to debunk that stereotype with a whole LIST of superstar’s which, you might be surprised to know, would be in that very group if they were to audition for the show.

So sit back, enjoy, and quit worrying about the fact that if YOU auditioned for the show, you would be grouped together with the housewives and pub singers in the category dreaded by all.

Yes, blonde-haired, fresh-faced Ellie Goulding might be renowned for her innocent, wistful voice but at the ripe old age of 27 Els would have been STRAIGHT into the Overs and had us yawning and making cups of teas during her live show performances for that reason alone.

Along with Ellie is her McBusted boyfriend, Dougie Poynter, and his five bandmates. Okay, so McFly did celebrate their ten year anniversary last year, making it pretty obvious that they’re certainly not the spring chickens that they used to be but it’s still a shock that those synchronised jumpers who sing about triple breasted women would be placed with the likes of Andy Abraham and Wagner.

We all crushed on Dougie when he joined the band at just 15 years old, he now comes in at a positively ANCIENT 26, with the rest of the group ranging between 28 and 31.

Well, most of them. Yes, we know – bands don’t get divvied up by age, they have a whole category of their own and it is normally mentored by Louis Walsh. However, if Mollie King, 27, Frankie Bridge, 25, Una Foden, 32, and Rochelle Humes, 25, were to audition as solo artists they would all be plonked in with the Overs.

Bad Gal RiRi is 26-years-old, which according to X Factor is FAR too old to be writhing about in her underwear and singing about sex. She needs to be in a floor-length, sequined gown and warbling a Leona Lewis song into a microphone PRONTO.

Watching the sexpot that is Justin every, single Saturday night on The X Factor sounds like a dream come true… But would we still fancy him if he was mixed in with the Over’s? Uncool by association, bringing sexy back would be down to the Boys category, 33-year-old Justin would be wearing a too-small suit and singing ballads, with his trousersnake dance moves kept FIRMLY under wraps.

Hot and dangerous… And 27 years old. We suppose a sign of her growing age came alongside Kesh’s decision to cut the $ from her name, but she does still have people dressed up as giant penises on stage with her and is obsessed with all things glitter, which Simon Cowell would be horrified by.

31-year-old Macklemore shot to fame with his tune Thrift Shop, where he raps about wearing a Onesie with the socks built in at the feet. Adorable on young blood such as One Direction and Justin Bieber, but imagine Sam Bailey in a Onesie with feet on? Unacceptable and inappropriate for a member of the Overs.

She’s currently caught up in a petty feud with Taylor Swift – who for the record is 24, time is running out Tay Tay! – but the childish playground antics, which reportedly include the threat of teaming up with Rihanna to embarrass Taylor at this year’s EMAs, aren’t what’s to be expected of the 29-year-old.

And there certainly wouldn’t be any of her frankly ridic outfits either.

She may have the joyous, dimpled smile of a child but 26-year-old Jessie should probably be applying for her pension if the X Factor standards are anything to go by, and she would DEFFO not be hanging around with fellow Bang Bang singer, 21-year-old Ariana Grande.

However, Jessie could still collab with everyone’s fave female rapstar (sorry Iggy) who is a WHOPPING 31-years-old. Nick, it’s time to put your Anaconda away and cover up with something a little bit more grown up. Leave the butt popping to the youngsters.

And, of course, Beyonce.

Everyone kind of knows Queen Bey’s age already, considering the fact she has been in the industry for actually DONKEY’s years, but it seemed wrong to not mention the super hot mama and megastar who comes in at 33-years-old.

Imagine if the Bey we all know and loved auditioned for X Factor only to be placed alongside Tesco Mary and Christopher Maloney.

It doesn’t bare thinking about.

Being 25 and over isn’t such a bad thing after all.