You may as well get settled on your sofa from now.

The X Factor live shows are kicking off this weekend and we are excited for a whole HOST of reasons, *ahem*:

1. It means it’s the countdown to Christmas. Officially.

2. LIVE. SHOWS. So basically, the hilarious Louis Walsh won’t be edited out of the entire series (as he has been so far), which means plenty more classic, million-dollar quotes.

3. Every single weekend for the forseeable future is booked up. Don’t fancy going out? Watch it live. Gone out? Sky+ and watch it hungover the next day. Win/ Win. 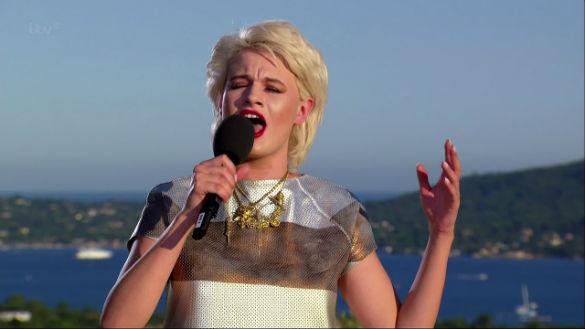 4. Chloe Jasmine is the kind of person who is MADE for live TV, with no secret second chances from the judges this is car crash telly just waiting to happen.

5. We live for the really badly lip-synced group performance on Sunday nights.

6. The brilliant celeb guests that perform on Sunday’s show.

And ITV are certainly not doing anything by half this year either, as they’ve only gone and booked not one but two massive names for the first Sunday night results show in the form of Taylor Swift and Pharrell Williams.

We repeat: Confirmed to perform this Sunday while the X Factor contestants nervously wait backstage awaiting their fate is ultimate babe TayTay, who will hopefully give us a sneaky insight into her new album, 1989, which is due to release at the end of the month, and the eternally youthful Pharrell.

And we’re telling you, X Factor – The next nine weeks now have a lot to live up to.

The first of the live shows kicks off on Saturday, where viewers will also find out which four lucky artists are coming back as their mentor’s ‘wildcard’ act.

Although after a HUGE Xtra Factor fail showed rejected singer, Lola Saunders, strolling around in the finalist’s house we think that it’s pretty safe to say that we have some idea of who might be joining Cheryl’s girls.

Still, surprise or no surprise, we can’t wait for the lives to start.

All together now: IT’S TIME. TO FACE. THE MUSIC.

[ Simon Cowell: The New Boyband Are NOT The Next One Direction ]